Boats have been an integral part of Friday Harbor Laboratories since June 1904 when Professors Kincaid and Frye, several assistants, and a dozen students arrived in Friday Harbor over several days on Mosquito Fleet steamers. Their luggage included at least one rowboat, which was used the next day to row over to Shaw Island and check on the progress of their new launch, the Dolly D. 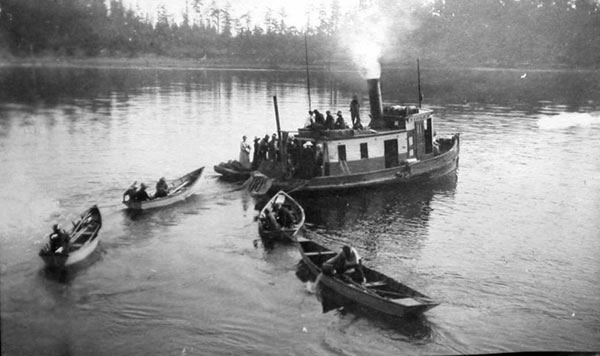 The Violet pulling rowboats full of students with the usually-present small barge (also full of students) lashed along its port side, 1913. This set up was very typical in the early years of the marine station operations but would be frowned on today. Photo courtesy of Marjorie Kincaid, the UW Library Archives, and Gretchen Lambert.

We know the names of 18 boats, from modest little steamers to the elegant pre-WWII ocean-going Catalyst, used to ferry FHL instructors and students around the San Juans over the past 118 years. These boats were used for transportation and for collecting in the intertidal, as well as dredging and towing nets in the deep channels to study the marine animals and plants and their environments. Beyond these bigger vessels, FHL has hosted a myriad of ever-present rowboats and the small power boats now in use at the Labs. 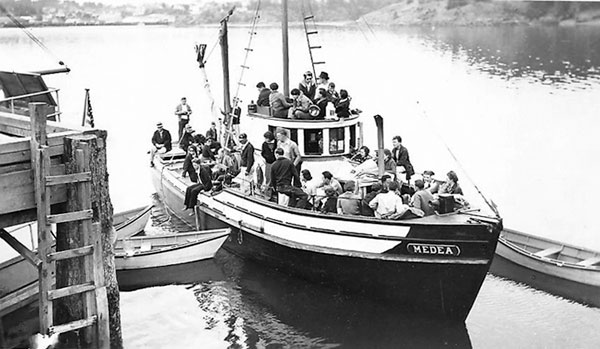 The Friday Harbor workboat Medea was used by the Labs in the 1920s and '30s for fieldtrips, and also in the mid-1920s for ferrying students between the old lab on Warbass Way and new lab, when both locations were in use. Photo c. 1937 provided by Alice Murphy, whose parents met as students at FHL in the late 1930s.

The Hydah by Gordon Robilliard

The R/V Hydah (Figure 3) was a converted bottom trawler designed for fishing in offshore waters, owned and operated by Cleave Vandersluys for FHL from 1947 to ~1985. It was a sturdy, reliable vessel, initially used primarily in logistic support. Cleave gradually modified it to handle bottom dredges, sediment cores, trawls, plankton nets, and water sampling instruments to be able to sample all manner of critters from the ocean bottom and the water column throughout the Salish Sea and occasionally offshore. Cleave collected samples for local and visiting researchers, and once even collected 24 coon-stripe shrimp to send to Germany! Using his long experience in the region, Cleave knew the local marine habitats and fauna/flora as well or better than any of the FHL scientists. On the Hydah was a meticulously kept log from every trip of what was collected and under what conditions – although unfortunately only Cleave could read his own handwriting. 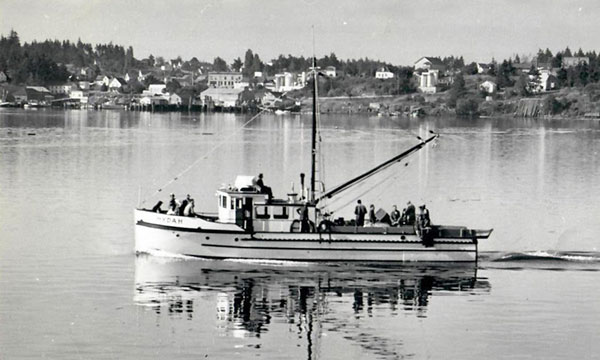 Cleave often had FHL graduate students onboard as deckhands, including myself and future-FHL Director Dennis Willows. On one trip to the ocean entrance of Strait of Juan de Fuca to collect deep water sea urchins, I “bragged” to Cleave that I had never been seasick. Near Neah Bay, in 8-10 ft rolling seas, Cleave told me to go below and check the oil level in the main engine. That hold was tight, dark, devoid of horizons, and smelled of oil. So much for never being seasick! On another trip while trawling for shrimp off Orcas Island, we shuddered to a halt: hung up on something heavy. Finally we brought up the barnacle-encrusted fuselage of a Cessna airplane about which Cleave commented, sardonically: “Well, I knew the damn thing was near here!” It still is.

The R/V Nugget by Craig Staude

The Nugget was a 42’ double-ender wooden salmon troller built in the late 1940s. Later it was enjoyed recreationally by Dr. John Bell and family, residents of San Juan Island, who generously gave the boat to the Labs in the 1980s. With the help of Dr. Bob Donnelly at UW School of Aquatic and Fishery Sciences and the skills of our talented Maintenance crew, we converted this “troller” into a “trawler,” capable of using much of the same gear as the Hydah as well as a remotely operated vehicle (ROV).

As Marine Techs, David Duggins and I had considerable experience operating small boats, but we had never captained a boat of this size for scientific collecting. This is where Cleave once again proved invaluable, stepping in to train us in collecting methods and local sampling spots. Director Dennis Willows also participated in the training and became one of the three skippers of the Nugget. 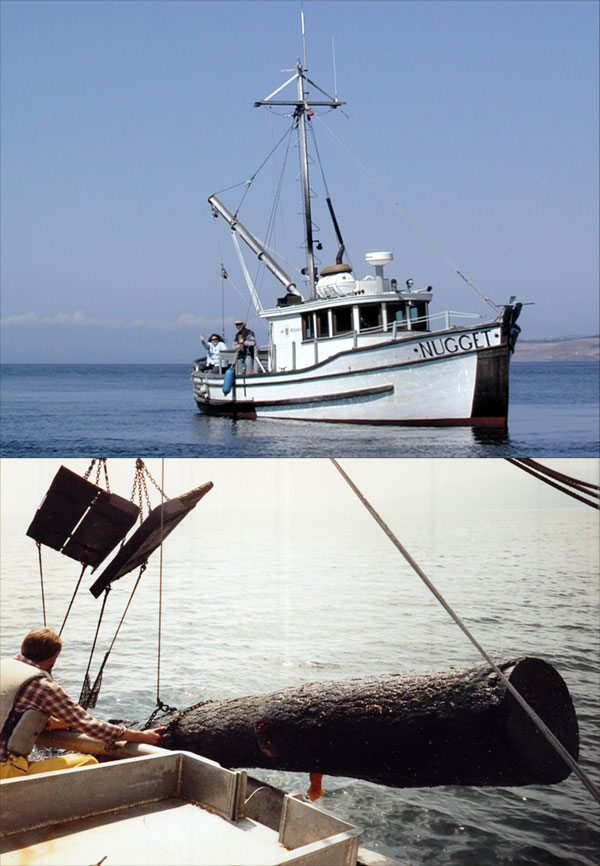 Although small, the Nugget was powerful and quite capable of rock dredging or trawling in the strong currents of the San Juan Islands. The original anchor winch was moved from the bow to the stern and fitted with a stainless steel cable, marked at regular intervals. The winch had no level-wind, so we had to push the cable by hand onto the drum while adjusting the rudder. No fingers were lost!

Some of our most memorable trips were to Bellingham Bay in search of the big pink sea slug Tritonia, used for neurological research by Dr. Willows and his students (see Bill Frost's Sept 2016 Tide Bite). Often in that bay the net would fill with heavy mud or waterlogged wood chips, or worst of all, with a barnacle-covered submerged log that took forever to extract from the net. Perhaps the funniest incident was the time we brought the trawl to the surface to find a very large orange sea anemone wearing sunglasses, staring right at us!

The shortcoming of the Nugget was its small size. The deck only accommodated eight or ten students comfortably around the sorting table, and usually allowed taking only half of a class on each trip. Nevertheless, for trawling and dredging the mechanics of dragging from the stern rail and dropping the catch directly into the sorting table were quite efficient. The Nugget remains my favorite boat.

The R/V Centennial by David Duggins

By the late 1980s it was becoming clear that the Nugget was “tired.” The fact that it was a “double ender” (pointed at both ends) meant that there was very little space on the aft deck. In 1990 Dennis Willows and I wrote a proposal to the Murdock Charitable Trust for acquisition of a new, larger vessel. Our proposal was successful and in late 2002 we purchased the 58’ steel-hulled fishing vessel St. Patrick from Mark Anderson. The boat was in excellent shape thanks to Mark, and he took charge of the work needed to convert it to a research vessel. However, it was more boat than either Craig Staude or I could handle without additional training. To our good fortune Mark was persuaded to give up fishing and come work as a co-captain and vessel engineer of the newly re-named Centennial (the vessel was purchased in FHL’s 100th year).

The Centennial had room enough for a class of 20 students to be on it at once, along with power and lifting capacity. For almost 20 years it served our teaching and research needs extremely well. For the first time we were able to accept interesting research contracts at greater distances away from home port. Perhaps the most unusual one was when we got a call from the Port of Everett, wondering if we might want a carcass of a fin whale that had been struck by a big ship and dragged into the harbor. We did, in fact — we already had a permit to sink a whale carcass for an experiment looking at the decomposer communities that use such resources. So we zoomed south on the Centennial, tied lines around the whale's (rotting) fluke, and towed it slowly north — including through Swinomish channel, where there were a lot of people on shore and other boats doing double-takes and holding their noses! 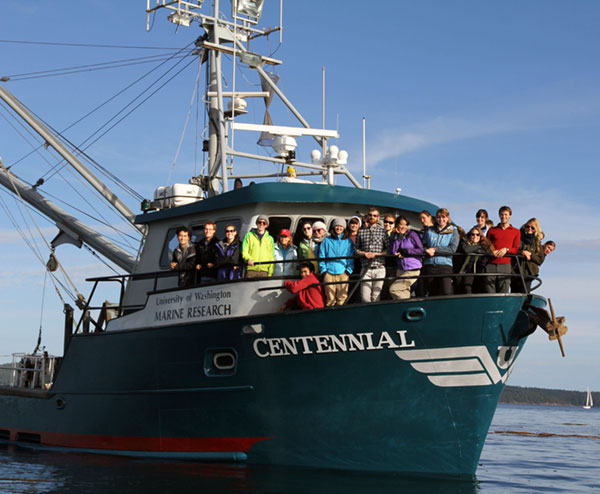 The R/V Centennial heading out with a big class of students. Photo credit: Dave Haas.

Other projects had the Centennial cruising well offshore of the Olympic peninsula, as far south as the Oregon border. Much of this work involved deployment and recovery of oceanographic instrument packages placed on the ocean floor. This sort of work was both lucrative and of high scientific value. However by ~2015 the research funding for such expensive work was drying up, and without such projects it was difficult to cover the annual expenses of the vessel and crew. As we wrote about in the Feb. 2021 Tide Bite, Centennial ended her UW career in summer 2019 and was replaced by a smaller fiberglass vessel, the Kittiwake, which we are able to run more economically. Who knows what or when our next boat will be! 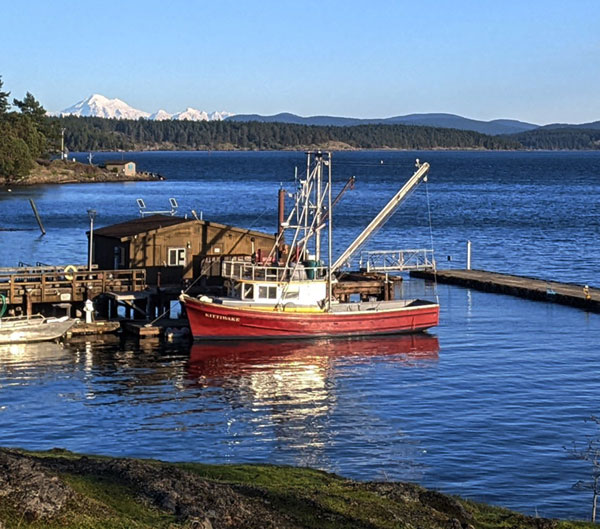 The R/V Kittiwake at home at the FHL dock. Photo credit: Mason Wiley.

As any vessel owner knows, a boat is just a “hole in the water you pour money into.”

You can support FHL boats by giving to the Gordon & Helen Robilliard Marine Field Equipment Endowment or the FHL Research Vessel Fund.