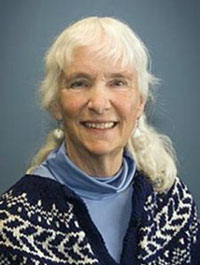 While most research at FHL focuses appropriately on marine organisms and local field sites, the essay below illustrates how profoundly powerful it can be to do comparative biology – in this case, drawing connections between the development of crustaceans like barnacles and shrimp, and insects like fruit flies. Jim and Lynn’s research into the hormonal and genetic processes controlling animal metamorphosis had a breakthrough in the last year, with an exciting and novel finding that is now published in one of biology’s most prestigious scientific journals and discussed in a recent Commentary. As icing on the cake, Jim recently joined Lynn as an elected member of the National Academy of Science! We are honored that they make FHL their scientific home. While reading the Tide Bite below, you’ll likely find it helpful to know that gene names are written in italics, while an identical protein name will be in normal typeface.

We both grew up in the Midwest – Ohio for Jim and Illinois for Lynn – and early-on became fascinated with metamorphosis: the ability of an organism to radically change its form at some point in its life. Jim’s fascination started with insects in high school while Lynn’s began with frogs at Radcliffe College. We have always been interested in questions of developmental biology and find that the mystery of metamorphosis and how one complex organism can transform itself into another, very different, organism presents a particularly exciting challenge.

We have spent our careers studying the Arthropoda, the phylum of animals with a hard exoskeleton and jointed legs. These include arachnids (spiders & ticks), myriapods (centipedes & millipedes), crustaceans, and insects. The first two classes show direct development so that the hatchling is a miniature adult, but the last two classes include members with profound metamorphoses. Their hatchlings do not resemble their parents but only later undergo an abrupt transformation to the species-typical adult form. 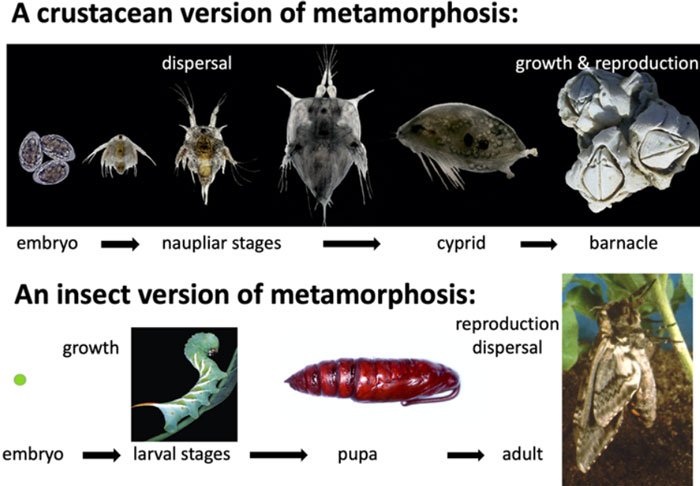 Metamorphosis in crustaceans is beautifully illustrated by barnacles, which spend their adult life firmly attached to a substrate and “fish” for small organisms in the water over them (Figure 1 top). Their young, however, are free-swimming nauplii larvae in the plankton. After several molts, they transform into a cyprid larva that then attaches to the substrate and changes into a juvenile (miniature adult). For such metamorphic crustaceans, the larval stage is adapted for dispersal and most growth occurs after settlement and transformation into the juvenile. A different metamorphic strategy is evident in insects where the larval stage is rather sedentary and adapted for growth, while the adult stage is more active and involved in dispersal. In moths for example, life starts out as a caterpillar that undergoes a series of molts as it increases in size ~10,000 fold (Figure 1 bottom). Metamorphosis then ensues by first transforming the larva into a non-feeding pupal stage which forms the mold for making the adult. The adult differentiates within this pupal shell, emerging as a winged and highly mobile stage specialized for reproduction.

The insects and crustaceans are the two most successful classes of arthropods. They dominate marine (crustaceans), fresh water (crustaceans and insects), and terrestrial (insects) ecosystems. Their species diversity is due, at least in part, to their reliance on metamorphic strategies. We now know, based on a comparison of DNA sequences, that insects evolved from crustacean ancestors, analogous to the finding that birds evolved from a group of dinosaurs. Yet the question of whether the differences between metamorphosis in the two groups arose independently remains.

While our previous research had been on insects, our move to the Friday Harbor Labs in 2016 gave us the opportunity to focus also on metamorphosis in crustaceans. Did metamorphosis arise independently in the two groups or do insects use metamorphic mechanisms that came from their crustacean ancestors? Within the insects, the details about the evolution of metamorphosis have been controversial and extend back to the time of Aristotle. In his consideration of development, Aristotle concluded that the young of many animals arrive in the world in a “perfect” state in that they have the same body form as their parents although much smaller. Insects with complete metamorphosis, by contrast, gave rise to “imperfect” young that did not have the adult form. This larva was considered as a “soft egg” that needed to acquire something called Pneuma as it grew until it finally achieved perfection and could produce the adult form at metamorphosis. The Aristotelian ideas were updated in the 17th and 19th centuries, but the evolution of insect metamorphosis is still controversial.

The life histories of insects and crustaceans are orchestrated by a series of hormonal signals. Ecdysone, a steroid hormone related to testosterone and estrogen of vertebrates, causes molting in all arthropods. Molting of their exoskeleton is necessary for growth and for changes in form to occur. Juvenile hormone in immature insects suppresses changes in form during the molting process until the animal is large enough, then its disappearance allows metamorphosis. Then juvenile hormone reappears in the adult to regulate reproduction. In crustaceans, methyl farnesoate, the chemical precursor to juvenile hormone, is also involved in reproduction but its role in immature crustaceans is unclear.

The genome of insects with complete metamorphosis contains the instructions for making three distinct body forms – the larva, the pupa, and the adult; but how hormonal signals interact with the genetic blueprints for each life stage is poorly understood. A half century ago, it was proposed that each stage was controlled by a master gene that controlled the set of genes appropriate for each stage. Also, each master gene inhibited the expression of the others, so once an organism was in one stage, it was locked in until hormonal signals somehow shifted the relationship to allow movement to the next stage. However, this theory was largely ignored and a search for such master genes was never undertaken.

In the ensuing years, genetic tools developed for the fruit fly, Drosophila melanogaster, provided a powerful platform for gene discovery. Screens for genes important for metamorphosis identified two genes that could fit into the category of master genes: one is called broad which directs the production of the pupal stage. The other is E93 which is needed to make the adult. Both broad and E93 encode “pioneer proteins” that open different regions of the genome so that the animal can access and express the genes necessary for the pupal or the adult stages, respectively. Importantly, E93 and broad inhibit each other’s expression so that when the insect is in one stage, it does not have access to the genes of the other stage. 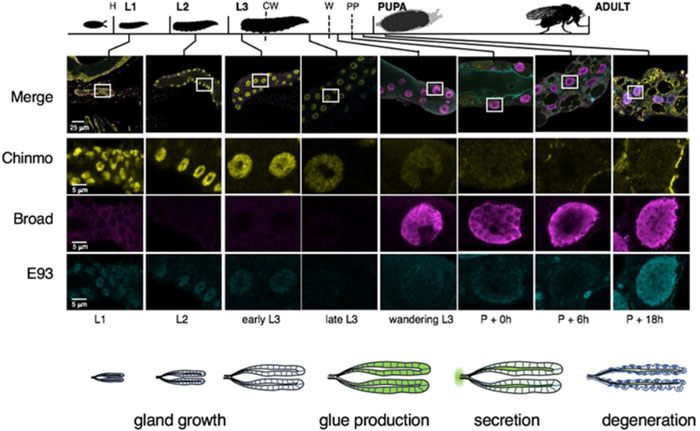 Although we were not authors on the paper that presented the Master Gene Hypothesis, we were present at its “birth” and discussion at Harvard University over 50 years ago. These discussions came back to us during the pandemic when we read a paper that provided a clue to the possible elusive larval master gene. By turning again to the fruit fly Drosophila, we rapidly assembled, from labs around the country, a collection of antibodies and genetic stocks to study our gene of interest. The fact that we could not travel meant that we had the time to push the experiments forward without interruption. Within six months we had found that our candidate gene, which is called chinmo (for chronically inappropriate morphogenesis), was the master gene for the larval stage. The Chinmo protein is structurally related to Broad, so it also could be a pioneer protein. Importantly, we found (1) that chinmo is expressed when the larva is forming and during the phase of pre-metamorphic growth of the larva (Figure 2), (2) without chinmo, cells in the first stage larva leave the larval state and initiate metamorphosis, and (3) in the absence of chinmo, the other two master genes are expressed precociously in the embryo or first stage larva, rather than at their expected time at the end of larval growth. Based on these properties, we concluded that chinmo is the larval master gene and thus is the third member of a “molecular trinity” that directs the stages of insect metamorphosis. We were quite excited because this discovery of the complete membership of the “trinity” may finally allow us to resolve a controversy that has persisted through the centuries!

Does this molecular trinity provide new insights into how metamorphosis evolved within the insects and whether there are ties between the insect and crustacean systems (Figure 3)? Work by other researchers shows that E93 oversees the adult stage in diverse insects, irrespective of their type of metamorphic development. Broad is more interesting because it appears when the insect becomes “perfect” (in the Aristotelean sense). In insects with complete metamorphosis, it first appears in the pupa; in direct-developing insects, it appears early in embryogenesis as the perfect form begins to be made. What then about the larval master gene, chinmo? Gene expression data from another lab using cockroaches and our current studies on a very primitive insect the firebrat, Thermobia domestica, show that chinmo is expressed very early in embryogenesis and declines at the time that Broad appears to support the formation of the “perfect” form. Only in insects with complete metamorphosis does Chinmo persist into postembryonic (larval) life where it suppresses the achievement of “perfection” and maintains the larval form. Chinmo provides the first molecular evidence to support the supposition by Aristotle of 2300 years ago that the larva is indeed a “soft egg”! 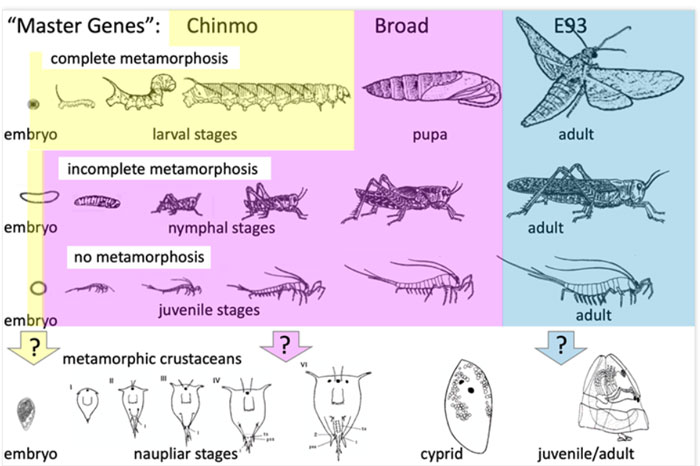 Terrestrial hexapods, including the insects, emerged from within the Crustacea with their closest relatives being the Remipedes, an obscure group of crustaceans that were first discovered in sea caves in the Bahamas in 1979. Remipedes begin life as a nauplius-like larva that adds segments as it grows. Thus, possibly the crustacean ancestors of the insects were metamorphic, but this trait was suppressed as their hexapod descendants invaded the land and diversified. These metamorphic roots, though, may have later been exploited as insects radiated out into terrestrial niches and eventually readopted a metamorphic lifestyle, but in a very different context from their crustacean cousins. Although the marine diversity at Friday Harbor does not provide us with remipedes, we are focusing on the diversity of crustacean forms that are available at FHL to extend our study of the ancestral functions of this molecular trinity.