After the Winter 2020-2021 literally miserable on time performance of the San Juan ferries departing from Anacortes, the Peak Season 2021 seemed to be off to a pretty good start. Loading crews seemed more efficient, and maybe the docking times were more realistic. But then, Father’s Day 2021 … a Sunday, and arguably the busiest ferry day in the San Juans since school was out and the weather was perfect.

That was a nightmare and delayed hundreds of people. And not San Juan Island related, but:

I can understand delays for weather, tides, or mechanical problems. Those just happen with boats and ferries.

BUT … WSF’s owes the public a factual explanation of why they can’t get a crew together to operate a scheduled ferry on a busy weekend.

And if they didn’t have a full crew, where were the standbys? And why couldn’t they get a standby (or standbys) and sail late?

And then add the almost too absurd to be believable: 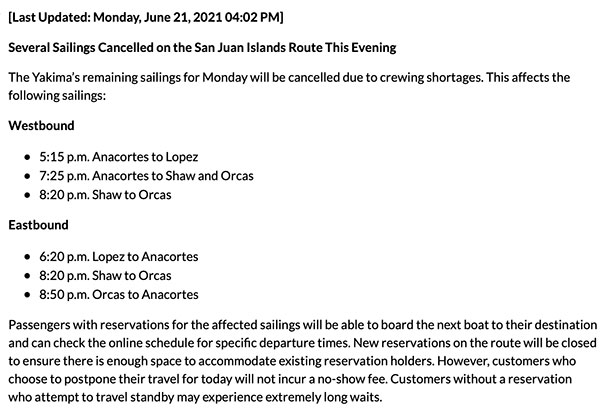 Is this a union walkout, or something with about a contract dispute, or??? Anything to do with the the new national holiday?

I don’t normally swear, but WTFO?

I’ll two other questions: (1) Do the crew members who show up get paid for that day’s scheduled work? (2) Do sailing cancellations count in the late sailing statistics?

And FYI, WSF’s still hasn’t answered my question of how many unions with which they have labor contracts.

If I don’t get some answers, I’ll have to resort to public record requests to try to figure out what is going on beyond the benign public announcements.