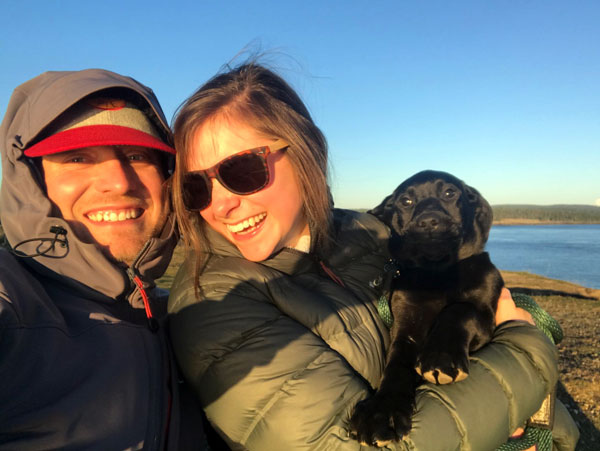 Hello! My name is Daven, and my fiancee Olivia and I are entering our fifth year on SJI. We’ve loved it here, which is pretty much a given for anyone who has the good fortune of living year round on the island. I moved down from Juneau, Alaska, and she moved up from Akaroa, New Zealand. We’re lucky to have bumped into each other years ago at the San Juan Brewery, and the rest, as they say, is history.

We’ve lived at the same rental, year round, since 2018. It’s been an absolute blessing to have that stability on SJI. We’ve both worked full time since we’ve been here—she as a marine science communicator, and me as an independent contractor in the field of science communication and the maritime industry. Olivia previously worked in wildlife rehabilitation and reintroduction, helping injured wildlife recover and return to their natural habitats. She also supported community education efforts associated with the realities of wildlife rehabilitation.

My work regularly takes me to Nunavut (Canadian Arctic) and Antarctica, where I captain small boats and, in the North particularly, serve as a presenter on the history of polar exploration and as a polar bear “guard.” Locally, I’ve captained boats in the wildlife/ecotourism industry, prioritizing ecosystem-wide education, and the interconnection between freshwater, estuarine, and marine ecosystems, and how human and societal health are directly linked with environmental health. Prior to moving to SJI, I worked as a large carnivore field biologist in Zambia and Angola, a brown bear field biologist in Alaska, a Bristol Bay commercial fisherman, a cabinet maker, and I co-directed a regional wild salmon conservation and Tlingit Nation food sovereignty advocacy organization in Southeast Alaska. Olivia and I have remained committed to the field of biodiversity and ecosystem education, and in particular wild salmon protection and restoration ever since.

Olivia and I have talked at length about our desire to stay on San Juan Island, and as a young couple looking to start a family, we want to ensure we have housing stability. We’ve both observed the recent wave of skyrocketing real estate prices, as well as the numerous renters who have had to either find alternative housing or move off island altogether when their rental suddenly hits the market. Our landlord has been exceptionally kind to us for the past four years, but has hinted that their family might return to the island and reoccupy the house they’ve owned for decades in a year or two. We’ve been assured that we can remain in our place for the rest of the year, but the simple act of observing the housing and real estate trends on the island have, of course, made us want to begin planning our next step sooner rather than later.

As a young couple hoping to establish a family, we don’t want to rent forever. However, we’ve run into a bit of a conundrum. Olivia and I are both dedicated to our field of work. We both believe in it, are passionate about it, have college educations and a decade and a half of hard work in the field. Although the work we do is what we believe in, it unfortunately simply does not compete with some 21st century industries and the associated remote workers that have left the city for more rural communities. Not meaning to sound offensive or resentful, it just is the reality. Our industry simply cannot compete with other industries when looking to buy a home here.

A realtor friend of mine a few states east of here recently told me to not give up hope. He’s noticed a small yet significant percentage of property owners who have expressed a desire to sell to “the right people,” or “good people,” rather than to fetch the highest price. I understand that such a hope on SJI presently is a total moon shot, given the rapidly ascending prices, but we’re hoping that there might be a few property owners on island who fall into that category. That of wanting to meet and know the people they are selling to, wanting to hand their legacy off to someone who will care for it the way they cared for it, rather than simply seeking the highest offer.

As I re-read that last sentence, I understand how crazy that might sound. And it probably also sounds as though we think of ourselves as “good people” and everyone else as something other than that. Which is certainly not the case. We're just people, looking for a home, just like everyone else. But as my friend recommended, we are not giving up hope, and we’re hoping to connect with anyone on the island who would be interested in selling to a couple folks like ourselves.

The future Olivia and I envision is something akin to how we both grew up: in small towns with small town values. Olivia grew up in a rural mill town in northern Wisconsin, and I grew up in a family of carpenters in a tiny agricultural community in western Colorado. Our dream is to live on the same simple piece of land and in the same simple home for the longterm, rather than buying and selling houses and constantly moving and upgrading. Our vision of heaven is pretty straight forward: a little bit of land with a few fruit trees, a productive vegetable garden and greenhouse, a couple hens for eggs, a small woodworking shop, a few dogs running around, and a few kids chasing the dogs around. Somewhere where we can build a life and enjoy things as they develop over the years, including growing a little family that likes to spend their time outside. Simple, grounded, and oldschool. We’re hoping we haven’t missed the boat to turn that vision into a reality.

We’d like to build that life on the island because we both really value the ways a lot of islanders live here. On their own patch of earth, growing their own food and working with lumber from the island’s small sawmills, being creative and independent. A life of simple yet beautiful freedom, really. In many ways, it reminds me of a few communities in Alaska that I love, just with significantly better weather. And it reminds Olivia a lot of her time in New Zealand.

If there are any folks on the island considering selling land, a cabin, a small house, or some other unconventional idea and are interested in passing the torch to a young family who will respect and care for someone’s land, history, and legacy the way they’d want it to be taken care of, and to continue the simple and oldschool way of life, we would be thrilled to hear from you. Email is best for us, and we can be found at davenandolivia@gmail.com

To anyone who took the time to read this, we offer a sincere thank you. And we’re crossing our fingers we will hear from someone at some point.