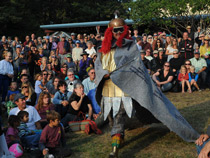 Ferry schedules, baseball caps and a whole lot of business cards (received a week before quitting) were just a few of the materials used in the entries at the  Fashion Trashion Show at the 2015 San Juan County Fair. Applause greeted the models as they rocked their way through the crowds to the runway. Music ranged from Beastie Boys to Taylor Swift.

The show started with the large cast of the upcoming San Juan Community Theatre presentation of Disney's Little Mermaid. All of the costumes were made out of recycled materials.

The three judges awarded prizes to all eligible entries -  ranging from "most wearable again" to "best use of trash". A few of the entries were just for show.

Amy Wynn was the first to sign up for the show and won one of three big prizes. She was ecstatic to win the use of a dumpster.

Sharon Kivisto photos. (It takes a moment for the slideshow to load.)