Cattle Point Road is no longer threatened by erosion. A new wider portion of the road built at a higher elevation than the old section was officially opened Thursday, October 15, 2016 with a ribbon-cutting ceremony.

Randy Hart from the state County Road Administration Board (CRAB) explained the long journey to obtaining funding. The creation of FLAP -  the Federal Land Access Program - in 2012 was the key to funding the multi-million dollar project.  The portion of the road that was in danger of eroding runs through San Juan Island National Historical Park which is federal land.

Lindsay Baumann, a student at the University of Montana at the time, was the first to document the problem with a study she did for her thesis. 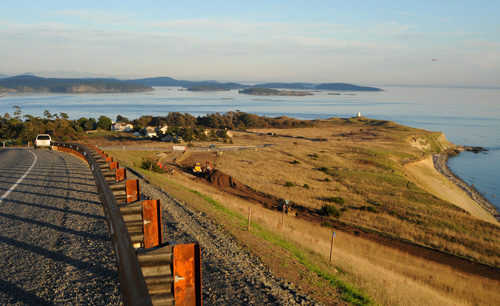 Overall, the project took 14 years of planning, one and half years of design and six months of heavy construction by Strider Construction of Bellingham. County crews chipsealed and striped the road and will complete the process by "fogging" it next spring. The road way will end up being black.

Acting National Park Superintendent Jerald Weaver said he heard the term"glacial"  used to describe the pace of progress over the years.  He said it was phenomenal how the project worked out after "money fell from the sky". "It took all of us to make it happen," he said. Partners included FHWA's Western Federal Lands Highway Division, San Juan Island National Historical Park, San Juan County Public Works Department and the Washington State Department of Natural Resources (DNR).

Hart noted the importance of the county's readiness - for example the EIS was done  - when the FLAP funding was created. He said "The county was really fast getting their application in."  Requests totaled $90 million of which $35-40 million were funded. The county received $5.5 million.

Criteria for FLAP funding includes safety - including for bicyclists -  preservation, mobility, environmental quality. The county provided "a very good pitch" according to Hart.

Council member Bob Jarman noted all of the "sofa engineering" provided by the public during the lengthy discussions about the options. He thanked the federal and state agencies and the county Public Works Department and the 175 families who live at Cape San Juan. They endured waits of up to 30 minutes to traverse the construction zone.

Jarman finished up by saying,  "It is ours now to enjoy the new vistas."

Photos by Sharon Kivisto - Slideshow appears above the title. May take a moment to upload.