A transient orca, seen entangled in a rope and float three weeks ago, is now free of the gear. In photographs taken near D’Arcy Island, BC on November 23, 2015 by Capt. Jim Maya of Maya’s Legacy Whale Watching the killer whale appears to be in excellent condition.

A photograph taken off the Thetis Island-Chemainus Ferry in Stuart Channel, BC November 4, 2015 prompted an urgent search by PWWA and the Department of Fisheries and Oceans (DFO) Canada for T77A, a 19-year-old male transient or Bigg’s killer whale apparently encumbered in what may have been a crab pot. 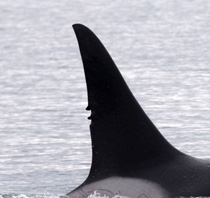 T77A is a favorite among the whale watching community. Together with another adult male T49C he’s part of a tandem of Bigg’s whales known by whale watchers as “the twins” because they’re often seen traveling side-by-side and have identical shaped dorsal fins and notches on the trailing edges of the dorsal. They also seem to enjoy each other’s company, frequently socializing together. T49C has been spotted since the search began, but no T77A.

“That worried me a bit,” explained Michael Harris, Executive Director of Pacific Whale Watch Association, representing 36 operators in BC and Washington. “So I was elated when Capt. Jim called with the news. Our entangled twin is free at last.”

“What a thrill! We headed out today with a full boat and found a single orca, and that happened to be T77A,” explained Capt. Maya, who captured excellent images of the whale. “Such good news. Swimming free!” 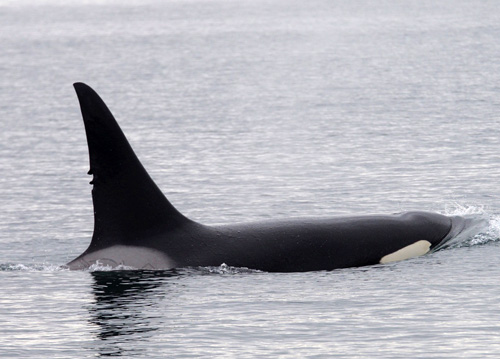 The efforts to locate T77A was fast and furious, led on the PWWA side by Capt. Hobbes Buchanan of San Juan Island Whale & Wildlife Tours, who enlisted his Capt. Alan Niles to traverse wide swaths of the Salish Sea on an intensive, dedicated search for T77A. Whale watch crews throughout the region were on high alert for the orca, and PWWA spread the word throughout the maritime community to be on the lookout, from tug crews to ferry workers on both sides of the border.

In future, DFO Marine Mammal Coordinator Paul Cottrell advises that if a whale is sighted with possible entanglements, do not engage the animal or gear but immediately call the British Columbia Marine Mammal Response Network at (800) 465-4336.

“Entanglements like this don’t happen often with killer whales as they do other whales,” Harris continued. “And when they do happen, they often find a way to get themselves out of trouble. But we don’t take anything for granted out there. We’ve got the expertise and the resources to help, so our attitude is, all hands on deck.”

HOW TO HELP: For all those who want to help the whales, become a Member of The Center for Whale Research. The Pacific Whale Watch Association is proud to be a longtime supporter of Ken Balcomb and his team. Help them help the whales. www.whaleresearch.com.

More in this category: « The Humpback Highway Another baby orca in Lpod »