Each year, typically beginning mid-February to early March, the small population of gray whales known as the North Puget Sound (NPS) grays, or "Sounders", detour from their long northbound migration between Baja, California and the Bering Sea, heading east to feed on ghost shrimp buried in the tidal flats around Whidbey, Camano, and Hat/Gedney Islands, and nearby shorelines. 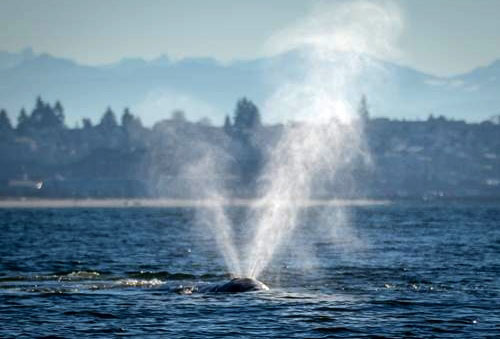 Orca Network’s Whale Sighting Network (WSN) assists Cascadia Research Collective (CRC) to track the arrival and presence of the grays. In the past decade the whale designated CRC53 and nicknamed “Little Patch” has often been one of the earliest or first arrivals, and this year was no exception. His official arrival date of December 7, 2021 means he chose to skip the remainder of the southbound migration to the mating and birthing lagoons of Baja, Mexico to feed in these inland waters.

CRC22 “Earhart” was next to arrive, showing up two months earlier than usual which means she too chose to skip the remainder of the southbound migration to come feed. As of March 9, 2022 another nine returning “Sounders”, two 2022 “newbies”, and one new unknown whale have been confirmed by Orca Network’s WSN, Cascadia Research, and the Pacific Whale Watch Association. The ninth Sounder CRC44 “Dubknuck” just arrived this morning! We received this update from John Calambokidis, Research Biologist, Cascadia Research Collective prior to Dubknuck’s arrival :

“Sounders gray whale update and recent survey in north Puget Sound Hannah Clayton and John Calambokidis from Cascadia completed a survey on Sunday 6 March 2022 out of Everett and covered Possession Sound, Saratoga Passage north to Skagit Bay and Port Susan and found whales in a number of areas and also obtained some good acoustic recordings. Based on photo-IDs, Alie Perez confirmed eight different IDs from the survey: 22, 53, 185, 531, 723, 2249, 2356, and 2362.”

In 2019, NOAA designated a gray whale Unusual Mortality Event, or UME, defined as “a stranding that is unexpected (and) involves a significant die-off of any marine mammal population.” During the UME years several of the “Sounders” have been arriving earlier and staying longer. Also, during the UME years there has been an increase in the number of additional grays who have discovered these feeding areas, approximately 25 individuals since 2018. Many of these “newbies’ have returned one or more years taking advantage of the ghost shrimp found along some north Puget Sound shorelines. 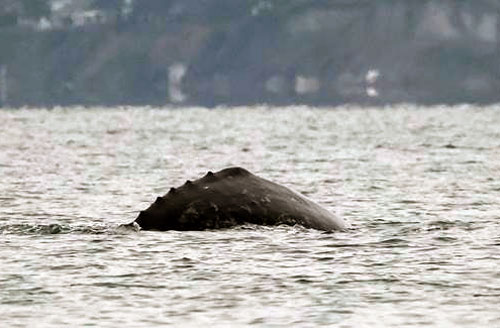 Whale sightings from the public provide critical information about the travels of the whales, and timely reports enable Orca Network to alert our volunteers, the public, and researchers who can get out with the whales to obtain photo identification and prey and fecal samples from the whales during their time in Puget Sound. All sightings are in turn shared with researchers, agencies, and the public. Sign up on our website (www.orcanetwork.org) to receive weekly Whale Sighting Reports.

Observers can help by reporting any whale sighting immediately and when possible photographing the whales to help provide IDs. Call Toll free 866-ORCANET (672-2638), email info@orcanetwork.org and cc' alisa@orcanetwork.org, or post to our Facebook page https://www.facebook.com/pg/OrcaNetwork/

Watercraft operators are reminded to be on the lookout for these slow-moving whales and to respectfully share the water. Gray whales can surface anywhere unexpectedly. Follow all Be Whale Wise laws/guidelines (www.bewhalewise.org) while operating a vessel of any type. At first sight of any whale all vessels should slow to under 7 knots and keep at least 100 yards distance from gray whales.

Orca Network’s Whale Sighting Viewpoints Map is a useful tool which can assist observers with finding public shore-based viewpoints around the Puget Sound Regions. Our map can be accessed from: www.orcanetwork.org/Viewpoints.html. The map (in printed large format) and current sightings are also displayed at Orca Network's Langley Whale Center on Whidbey Island located at 105 Anthes, Langley, Whidbey Island.

The Whale Sighting Network, Langley Whale Center, and Orca Network website and social media pages also provide up to date information on the latest research and issues related to gray whales, orcas, other cetaceans and their habitats.