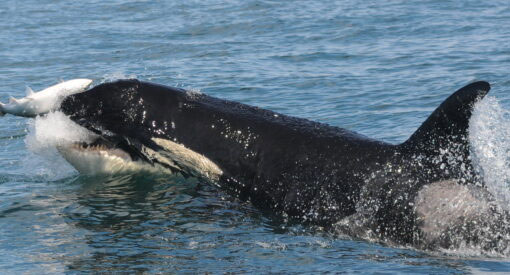 “The website is beautiful and chock full of information,” said Tara Galuska, the Governor’s orca recovery coordinator. “The website is an easy way for people to see what’s being done to save the orcas and learn about our unique orca population here in Washington.”

The website contains information on the progress implementing each of the 49 recommendations from the Governor’s Southern Resident Killer Whale Task Force, as well as general information about orcas, ideas about how people can help save the orcas and resources including school curriculum.

Gov. Jay Inslee convened a task force in 2018 to make recommendations for steps state agencies could take to recover orcas. The task force worked for 2 years and concluded with two reports that made 49 recommendations centered around increasing the orca’s food supply, decreasing disturbance by boats, reducing pollution and addressing impacts from climate change and human population growth.

“It’s important that we save Southern Resident orcas. They are an iconic and treasured species in Washington and throughout the Pacific Northwest. They hold significant cultural value to native tribes and all Washingtonians,” said Gov. Jay Inslee. “If they go extinct, we would suffer an unacceptable loss to our environment, economy and culture. These animals have been sacred to countless generations of people residing here. I don’t want to imagine a state without our beloved orcas.”

Southern Resident orcas are unique because they eat mostly Chinook salmon, whereas other orcas have a more diverse diet. They also differ in size, fin shape and markings. In 1995, the Southern Resident population numbered 99 and today numbers 74 whales, the lowest number in more than 30 years. The task force set a goal to increase the number of whales by 10 in 10 years.

“We hope this website will provide valuable information and inspire everyone to join our efforts to save these beloved whales,” Galuska said. “There is much work to be done and it will take all of us pulling together to save them.”

One thing people can do is to participate in an Orca Action Month activity in June.

“We are so happy to celebrate Orca Action Month with the launch of this new website. We hope it is an additional way for people to find out how they can help the Southern Residents,” Galuska said. “Please visit the website for more information on events and activities you can do to learn about orcas and participate in Orca Action month.”

More in this category: « More than a dozen gray whales sighted this year Boaters pay fines for approaching endangered killer whales, putting their feeding at risk »