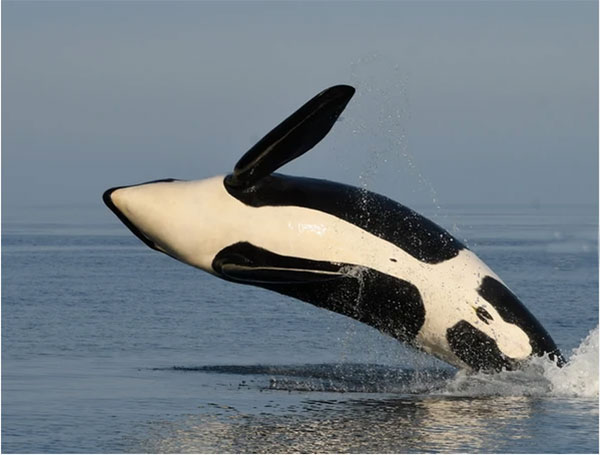 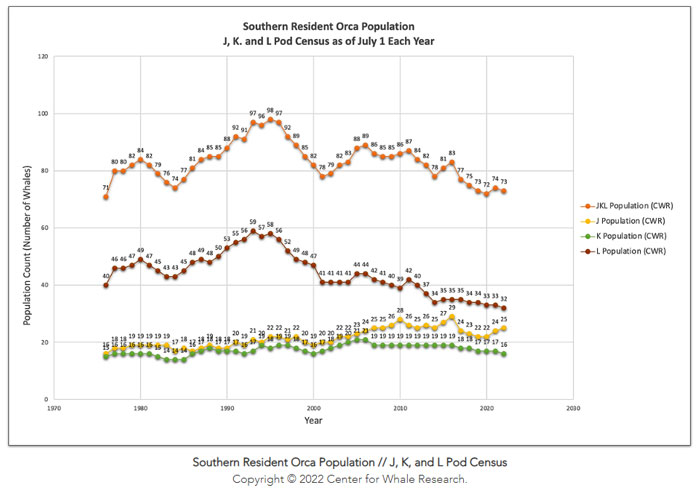 ​The July 1, 2022 census marks the lowest L pod census since the study began in 1976, with 32 individuals. K pod sits at its lowest number in the last two decades, at 16 individuals. With no mortalities and a single birth, J pod now totals 25 individuals.​

​J pod is the pod most likely to appear year-round in the waters of the San Juan Islands and Southern Gulf Islands, lower Puget Sound (near Seattle), and British Columbia’s Georgia Strait. This pod used to frequent the inland waters of the Salish Sea from late spring through early fall, but, in recent years, visits have shifted to a shorter timeframe (i.e., late summer/early fall: see 2021 Encounters). The most recent J pod births were J57 and J58 in autumn 2020 (see 2020 Encounter #40 and 2020 Encounter #54). ​

L pod is by far the largest of the three Southern Resident pods. L25, estimated to have been born in 1928, is both the oldest member of L pod and the oldest whale in the Southern Resident community. Sadly, one of L pod’s other matriarchs, L47, was missing in September 2021. The pod’s newest calf, L125, was born into the population in January 2021 and is a healthy female (Encounter #8).

Within each pod, families form into sub-pods centered around older females, usually grandmothers or great-grandmothers. Male and female offspring remain in close association with their mothers for life. ​

From July 1, 2021, to July 1, 2022, the SRKW population had three deaths: K21, K44, and L89 (shown in top photo by CWR). K21 was last seen in late July 2021 in the Strait of Juan de Fuca, severely emaciated. When he failed to be seen in subsequent encounters with his social associates, he was declared deceased soon after. From community observations, we know that K44 was alive as of late April 2022; however, he was not seen in subsequent encounters with his family. The body of a juvenile male killer whale, matching K44’s size and with markings consistent with a southern resident, was found entangled off the Oregon coast in late June, however, a lack of further photographs or biological samples prevents a definitive ID. L89 was last seen in late 2021 and not seen in 2022, despite repeated encounters with his mother and social group. ​​

During this period, there were also two new births. J37 had her second offspring, J59, in February of 2022. In May, CWR observation determined that J59 is female. K20 also had her second offspring, K45, sometime in April 2022. While CWR has encountered K45 on multiple occasions since then, this calf’s sex is currently unknown. Both calves appeared healthy in recent observations.​

Throughout the 1960s and early 1970s, the population of the three pods was significantly reduced due to whale captures for marine park exhibitions. The abductors killed at least 13 orcas during the captures; 45 whales were delivered to parks worldwide (read CWR Blog: Captured! Sold to the highest bidder!) Only one SRKW is alive in captivity (Tokitae/Sk’aliChelt-tenaut/Lolita). Seventy-one SRKWs survived in 1974.