Reproductive-age females have declined 24% since 2004.

The number of breeding-age females in each of the J, K, and L pods is as low or lower than they have been since 2008. And, perhaps more worrying:

The next generation of reproductive-age females (juveniles of ages 3-15) has plummeted by an even more dangerous 39% since 2000. (For details, visit the Orca Relief website) 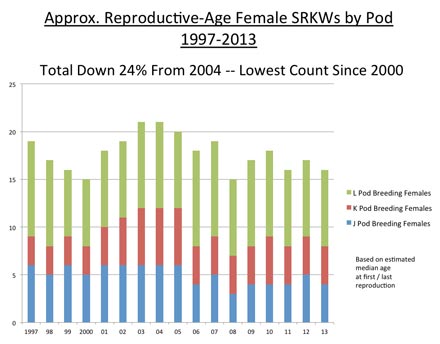 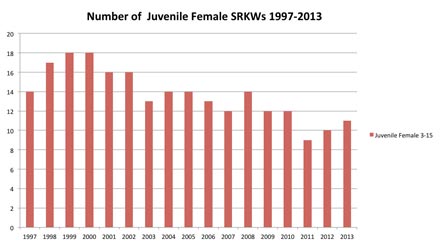 "Our new analysis suggests that the greatest danger to the population is much more serious than indicated by total headcount, as the breeding female population, today and tomorrow, plunges at an alarming rate. We are concerned that if additional protective steps are not taken very soon, it could be too late for Puget Sound’s resident Orca." Bruce Stedman, Executive Director

The Southern Resident Orca have been on the endangered species list since 2005 ­– with recovery efforts underway; however, instead of recovery, the population is in decline. From more than a decade of scientific studies on the issue of orca mortality, we know that Southern Resident Orca are being negatively affected in the following ways:

1. In years of low Chinook salmon returns, SRKWs are under stress for finding food;

2. Constant pursuit by the commercial motorized fleet (during daylight hours from May to October) leads to increased stress levels, increased metabolic rates and an increased need for food, while simultaneously reducing their sonar – and therefore hunting – efficiency;

3. In this situation, the whales begin to starve, and as this happens they consume the toxins locked in their blubber reserves, and they die.

Together these factors are almost certainly the reasons Puget Sound’s Endangered Orca are not recovering. Of these factors, only reducing motorized boat proximity can be achieved relatively easily, quickly, and inexpensively: by creating a Whale Protection Zone off the west side of San Juan Island, where the Orca can rest and feed without direct exposure to the dangerous ladder of factors that are killing them.

About Orca Relief Orca Relief is committed to recovering the health of the endangered Southern Resident Killer whales by relying on the best available science to demonstrate what must be done to protect J, K, and L pods from the noise and stress they experience in Puget Sound.

Orca Relief Citizens’ Alliance is a 501(c)3 not-for-profit corporation registered in Washington State. It is the oldest, and only, charitable organization with the sole focus of reducing resident killer whale mortality.