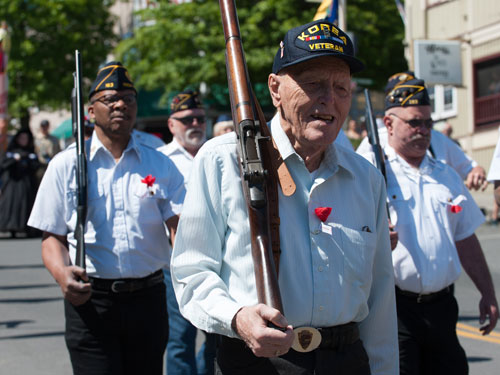 Turnout for the 2017 annual Memorial Day parade in Friday Harbor may have been a bit reduced by lack of updated information about a change in start time. A press release from the Town of Friday Harbor listed a 10 am start time. Later the Town asked the American Legion to change the start time to 11:30 am to avoid traffic from an off-loading ferry. Unfortunately a press release containing the new information was not sent out. 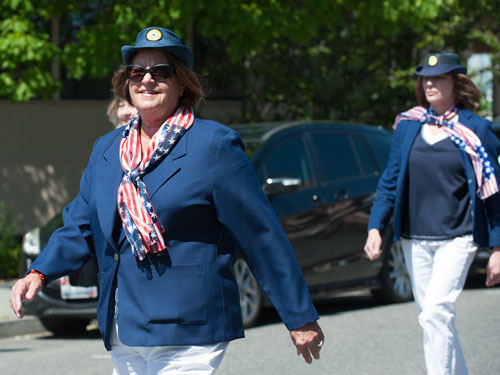 Despite the oversight, many people turned out for the parade and watched members of the American Legion Color Guard, the Legion Auxiliary, Battery D Civil War reenactors and Boy Scouts march down Spring Street to Memorial Park. A ceremony featuring the national anthem, Taps, and speeches took place as the marchers assembled at the park. American Legion member Shannon Plummer gave the featured speech. Islanders represented all branches of the military and widows of veterans. The ceremony also include Flanders Field. 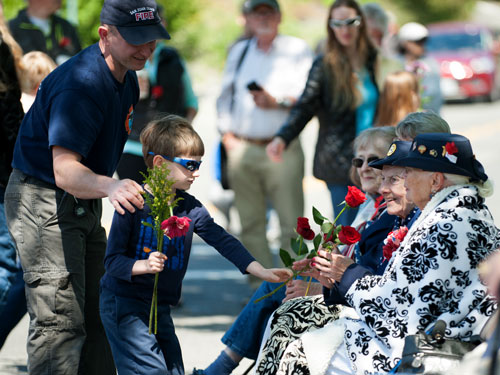 At the end of the ceremony, a Boy Scout laid flowers at the base of the granite memorial fountain at the park. Children who had handed out flowers to the widows, walked to the harbor and tossed flowers into the water in memory of those lost at sea.

In Flanders Fields the poppies blow

Between the crosses row on row,

That mark our place; and in the sky

Scarce heard amid the guns below.

We are the Dead. Short days ago

Loved and were loved, and now we lie

Take up our quarrel with the foe:

To you from failing hands we throw

The torch; be yours to hold it high.

If ye break faith with us who die

We shall not sleep, though poppies grow

Memorial Day began during the Civil War and is the holiday to remember those who have sacrificed their lives for their country. The website usmemorialday.org includes information about the history of what originally was called Decoration Day.

"Regardless of the exact date or location of its origins, one thing is clear – Memorial Day was borne out of the Civil War and a desire to honor our dead. It was officially proclaimed on 5 May 1868 by General John Logan, national commander of the Grand Army of the Republic, in his General Order No. 11. “The 30th of May, 1868, is designated for the purpose of strewing with flowers, or otherwise decorating the graves of comrades who died in defense of their country during the late rebellion, and whose bodies now lie in almost every city, village and hamlet churchyard in the land,” he proclaimed. The date of Decoration Day, as he called it, was chosen because it wasn’t the anniversary of any particular battle.

"On the first Decoration Day, General James Garfield made a speech at Arlington National Cemetery, and 5,000 participants decorated the graves of the 20,000 Union and Confederate soldiers buried there.

It is now observed in almost every state on the last Monday in May with Congressional passage of the National Holiday Act of 1971 (P.L. 90 – 363)."

snopes.com has extensive information about various myths about Memorial Day.