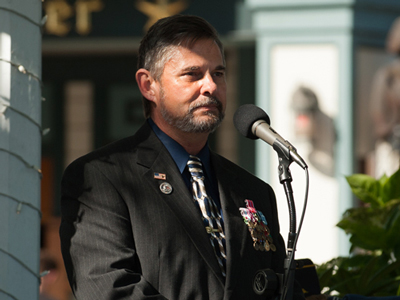 Kevin Holmes of San Juan Island spoke at the Remembrance Ceremony on September 11, 2016 in Friday Harbor. Here is his speech:

On Sep. 11, 2001 the United States was changed by a terroristic act. This nation as a whole was effected by the actions of a few. Whether directly or indirectly.

My day that day would start out like any other day processing legal actions for the Legal Counsel to the Chairman of the Joint Chiefs in the Pentagon. As news of the first aircraft hitting the towers in New York came in and our office was watching events unfold on out monitors, as was most of the rest of the world. The building in which I stood shuttered and a dull thud could be heard.

My boss turned to me and asked “You don’t think one hit us?” to which I replied, No Ma’am, if it had all the alarms would be sounding” at that instant all of the alarms went off everywhere in the Pentagon signaling distress.

I unthinkingly picked up the phone and called my wife who was working across town and told her “I don’t know what’s going on but I’m OK”, to which she responded “A plane just hit your building I saw it” I assured her it did not hit me or my area and told her I would talk to her when I could and hung up”.

I immediately started the evacuation and shut down process for the area I worked in which was a Compartmented Area with highly classified computers that had to be shut down. I instructed all personnel to depart for the rally point and went behind them to the back of the area shutting systems down as I came out.

As I arrived to the door to open it to depart I thought to myself that maybe this is not that bad, as I opened the door my reality was forever changed as in front of me was three people, two were carrying one between them. All three covered in soot and smoke the center person burned to the point I could not tell if it was a man or woman or uniformed or civilian. The traffic in the hallway was moving from my left to the right in the direction of the nearest exit.

I started to run left towards where the evacuation was taking place, stopped and turned around and headed to my appointed place in the National Military Command Center. Where I worked for the next 16 hours relocating and finding required personnel from their rally points to their needed posts within the national Command Center and the DOD Command center.

The impact of the aircraft into the Pentagon claimed 125 lives of military and civilians within the Pentagon. Three of them were my friends, SGM Larry Strickland, LTC Kip Taylor and SPC Chin Pak Wells. I still to this day ask myself “What if?, What if I had continued to the left towards the impact area, could I have helped one of my friends?, Could I have helped anyone else?”

I know the truth, the place they worked was no longer there but it is my regret. I also know that by the time I got to go “Outside” to the impact area the only thing I could do was help pick up pieces of debris, the fire marshal was allowing no one else into the impact area due to heat and falling debris. And as was unspoken, there would be no more survivors to help….

I do not often speak of my experiences, and have never spoken at a memorial event before. I come here today to say thank you, thank you for remembering my friends. 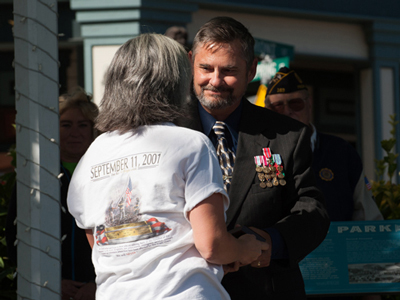 I also want to thank a special person to me, Ms. Robin DeLaZerda the Lead dispatcher for the San Juan County Sheriff’s Office. Robin has ALLWAYS remembered, in the nine years I have been here on the Island. Robin has made it her personal point to ensure that a 9-11 memorial Event happens and is dignified.

I would like to now present Robin with a set of coins that were presented to all employees of the Pentagon that were there on 9-11 on the first and second anniversaries and to publically say thanks for a job well done. We will never forget.