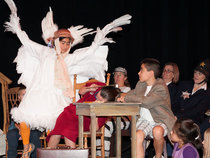 Law and Order: C-Rhyme and Pun-ishment, written by Jane and Jim Jeffries with music and lyrics by Bill Francoeur and directed by Penelope Haskew , is onstage November 21-23 in the Whittier Theatre at San Juan Community Theatre.

“In the nursery rhyme justice system, the people are represented by two separate, yet equally important groups….”

And so opens the latest production in the San Juan Community Theatre’s Family Theatre program.

This goofy musical spoof on the Law and Order television series features two detectives who have to figure out what happened to Humpty Dumpty when bits of shell are discovered scattered around at the foot of a wall. In the course of their investigation they interview Little Bo Peep, Georgie Porgie, the Sprats, a Little Old Woman who Lives in a Shoe and other familiar characters from Mother Goose.

“It’s chock full of some truly ridiculous puns which I expect both the cast and audience will enjoy,” said director Penelope Haskew. That cast will include both island youngsters in grades kindergarten through sixth grade as well as several adults (primarily parents).

Penelope adds veteran choreographer Lisa Duke has joined the crew to create jazzy numbers to go with the karaoke-style backing tracks. “I was very pleased that not only are the songs in this catchy, but the instrumental tracks are quite good—they sound like a full band.”

And with Penelope’s history of gathering young and older island talents to produce crowd-pleasing events for the entire family (this is Penelope’s 5th family theatre project), no doubt this Humpty Dumpty mystery will end up all it’s cracked up to be.

Student RUSH (at door only) $5

More in this category: « Vanya and Sonia and Masha and Spike - October 2014 FHMS play: Sally Cotter and the Censored Stone - March 2016 »