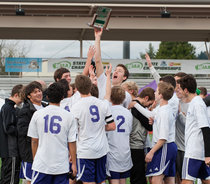 “We’ve had a lot of winless or almost winless seasons, so to have some reward for all that work is really nice,” Ayers said of the Wolverines third-place finish -- the best in school history.

“The players said it was the most exciting, entertaining game of their lives,” said Friday Harbor coach Andy Duke.

The Wolverines won the shootout 3-2 as junior Arno Issanjou, senior Sam Stewart and senior Cassidy Quigly sent their shots past the Eagles’ goalie. After his first two saves and two successful shots by the Eagles, Ayers knocked down the Eagles’ fifth and potentially tying shot. The Wolverine players and fans mobbed Ayers in the goal he had guarded so well, allowing only one goal in Friday Harbor’s final three playoff contests.

“Dalton was incredible. He was definitely the player of the game,” Duke said. “Any less of a performance would’ve definitely resulted in a loss.”

Friday Harbor’s performance followed a 1-0 semifinal loss one day earlier to runner-up Waitsburg-Prescott. The Wolverines failed on two scoring opportunities -- including a penalty kick that bounced off the left post -- in the final minutes against the Tigers. “The guys were really crushed, but a night’s rest and the opportunity to come back and finish as the best Friday Harbor team ever was a motivator,” Duke said. “They have a way of bouncing back.”

The consolation final was a high-level rubber match for the two Northwest 2B League teams. Grace won the first conference match 3-0 and Friday Harbor edged the Eagles 3-2 in the second meeting. Parity continued until the final shot of the season as they finished two halves and two overtime periods scoreless.

“Win or lose, they felt it was the greatest game they ever played,” Duke said of the players’ attitude in the pre-shootout break.

Ayers set the tone for the shootout when he knocked down Jeremiah Lee’s opening shot. “That was huge. He’s their leader in all aspects of the game,” Duke said of the Eagles’ top scorer.

In addition to turning away three of five shots in the shootout, Ayers also made two potential match-saving stops against Grace in regulation time. The first came on a corner kick booted by Lee. Friday Harbor’s keeper also “made a beautiful save” in stoppage time when an Eagle made a clean break to the goal, Duke said.

“I’m just glad to have our defenders in front of me,” Ayers said. “They really keep us in the game.”

Ayers pointed out the Wolverines finished third in the Northwest 2B/1B League, third in the Tri-District Tournament and third in state. “I think ‘3’ is our lucky number. There’s got to be something there,” Ayers said of the Wolverines’ third state tourney appearance.

Defense dominated Friday Harbor’s semifinal match against Waitsburg-Prescott as the teams combined for less than 10 shots-on-goal.

“We felt we didn’t play the soccer we wanted to play but we have to give them credit,” Duke said. “They played their style. “Waitsburg-Prescott was a great team, they were great sportsmen,” he added.

The Tigers’ Ivan Figueroa slipped through the defense for a goal in the 63rd minute. Duke noted the Tigers possessed “great individual skills. Every one of those players could go one-on-one with anybody.”

Friday Harbor came up short twice in stoppage time including on a potential game-tying penalty shot that bounced off the post.

“We had our chances,” Duke said.

Mount Vernon Christian, who advanced with a 2-1 semifinal win over Grace, secured a 22-0 season and the state title by edging Waitsburg-Prescott 2-1. The Tigers finished 15-4. 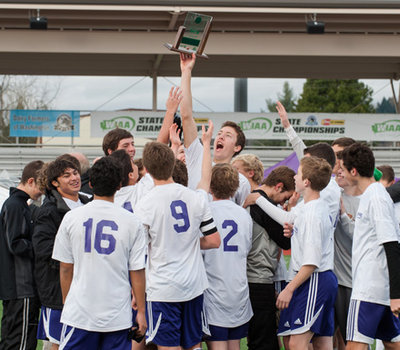 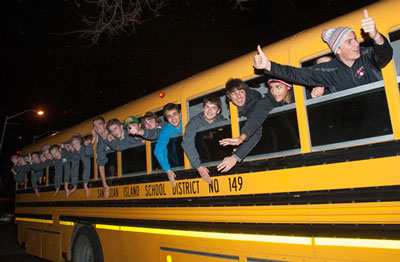 Saturday night, a cannon boomed, an EMS ambulance flashed its lights, blew its siren and parents and friends cheered as the Friday Harbor Boys soccer team arrived back in Friday Harbor after state tourney games in Sumner. Matt Pranger photo