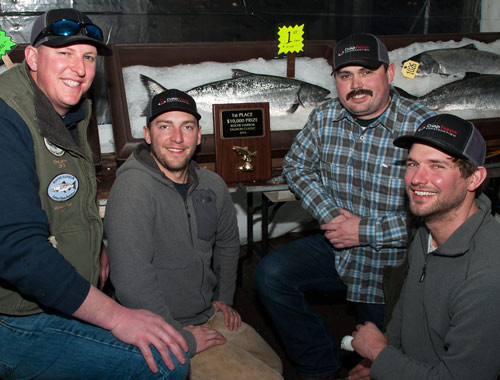 “We’ve been been dreaming about winning this one for years,” a beaming Fisher said after pocketing the derby’s $10,000 first-place prize. “This is my favorite place to fish.”

Pete Nelsen of Shaw Island caught a 17-pound, 2-ounce chinook about 3 p.m. and the legendary Island angler led the derby for about an hour. Nelsen finished second and took home $5,000.

Fisher and his angling partners -- Chad Deyo of La Conner, Dane Swanson of Mount Vernon and Justin Schwabe of Anacortes -- figured Fisher’s catch was in the top-five when he hooked it about 4:05 p.m. Saturday in Harney Channel, but didn’t realize it took over the lead. Since it was their day’s only keeper, they debated about continuing to fish until the derby’s 5 p.m. cutoff. After a derby patrol boat operator provided an unofficial weight of about 18 pounds, Fisher and friends quickly returned to Roche Harbor to make it official.

“You’ve never seen four guys moving faster in your life,” the derby winner said. Fisher was thankful his grandfather, Bob Fisher, brought his fiancé to the islands for the derby. “He taught me to fish...Just to win this in his presence makes this 10-fold as special.”

Ninety-two fish were weighed in.

The top prize winners and their fish weights were: 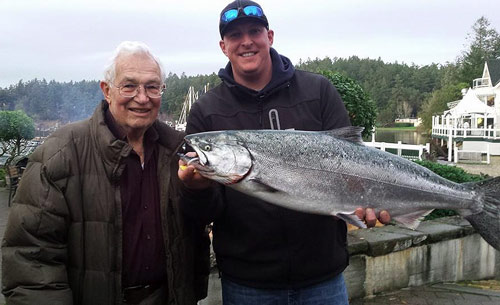 Fisher, right, with his grandfather. Photo by Roche Harbor Derby