“I’m pretty excited to win the next game ... They’re the rival everybody in our league wants to beat,” said Friday Harbor senior Will Christison. “It would be the first time we beat them and we’d be knocking them out of the state tournament.”

“We have the team to do it but we actually have to do it,” said senior Danil Sonjaya. 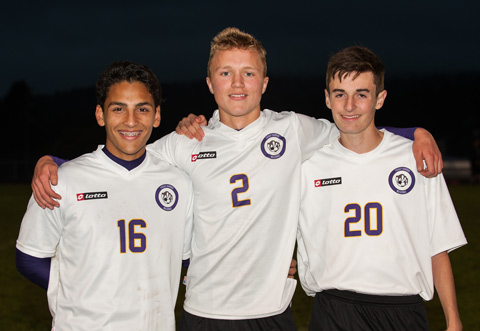 “I’m really happy we’re going back to state,” said Nick Armstrong, the Wolverines’ other senior. “I didn’t think we would when we started the season, but then we started winning games.”

Eliminating Mount Vernon Christian would be a colossal upset for 15-4 Wolverines. The Hurricanes, last year’s state champs, went 16-0 in the Northwest 2B/1B League and playing at Mount Vernon High School is nearly a home game for the cross-town school.

This year the Hurricanes are not unstoppable, though. They suffered their first loss in 40 matches when they fell 1-0 to Tacoma Baptist in the Tri-District Tournament Championship. And Friday Harbor played extremely competitive against the 19-1 Hurricanes, who won their league matches 2-1 and 2-0.

“We played them tough all year,” Friday Harbor coach Andy Duke said of the Hurricanes. “Our players are confident we can win this game but know it’s going to take their best effort.”

At the start of the season few thought the Wolverines, who finished third at last year’s state tourney, would be among in the state’s final eight this year: Nine seniors moved on from the 2014 squad. This year Robbie Miller was sidelined with an illness early in the season, leaving Armstrong, Christison and Sonjaya as Friday Harbor’s only seniors. “With such a small group of seniors, they really had to step into a leadership role and fill a big void,” Duke said.

Friday Harbor’s seniors put in extra time on the pitch during the summer “encouraging the young players and keeping them motivated,” Duke said.

“The freshmen were pretty forgiving and willing to learn,” Sonjaya said.

“We told the young players we don’t need a team of nine seniors to take it to state,” Christison said.

The cooperation between the seniors and underclassmen paid off: Friday Harbor finished second in the Northwest 2B/1B League with a 13-3 record.

Friday Harbor’s competition went up a notch in the playoffs. Tacoma Baptist topped the Wolverines 1-0 in the opening round of the Tri-District Tournament Oct. 31, 2015.

“That was a tough match. It could have gone either way,” Duke said.

The Wolverines secured a state tourney berth with a 3-1 victory over inter-island rival Orcas Island on Nov. 4. “We had beaten Orcas twice but we were wary knowing that it’s hard to beat a team three times,” Duke said. “We played strong and Orcas played strong too.”

If the Wolverines quell the Hurricanes in the state opening round, they will be advance to the semifinals and finals Nov. 20-21 at Sunset Chev Stadium in Sumner.