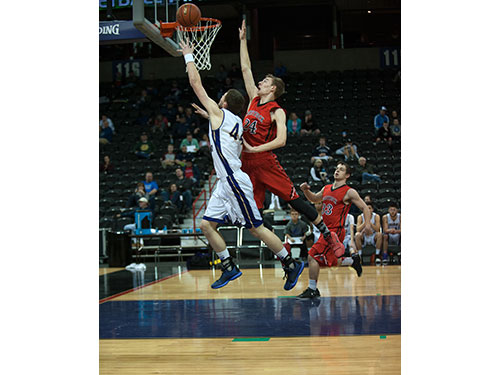 Friday Harbor boys basketball team overcame a frigid start against Mossyrock in a Class 2B State Tournament quarterfinal Thursday March 3, 2015, but the Wolverines lost momentum in the 69-57 loss in Spokane Arena.

"We dug ourselves too deep a hole," said Friday Harbor coach Rod Turnbull.

The Wolverines now compete in the consolation bracket against Life Christian (23-3) at 2 p.m. Friday, March 4 p.m. The winner advances to the fourth-sixth place contest Saturday, March 5; the loser's season is over.

The Wolverines began drilling treys in the third quarter and outscored the Vikings 23-15. They cut the Vikings lead to a point late in the period.

"We used a lot of energy and almost got even," Turnbull said.

Mossyrock bounced back in the final period, scoring 25 to Friday harbor's 17.

"We ran out of gas because we had worked so hard to get back ," Turnbull said.

Mossyrock's Jaron Kirkey led all scorers with 35 -- one more point than the rest of his team. The senior standout also sank 12 of 14 free-throws and pulled down eight rebounds.