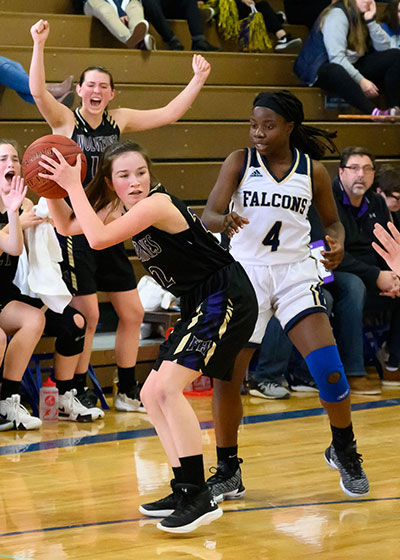 Auburn led most of the contest and were up 40-31 at the start of the fourth quarter. Friday Harbor held the Falcons to one point over the next four minutes and trimmed the lead to 42-40 on senior Leah Black’s three-pointer. The Wolverines drew even on Black’s steal and layup. At 2:12 Black drilled a trey to put Friday Harbor ahead 45-42.

The Falcons cut the lead to a point before the Wolverines lost senior Ava Hoffman to an injury with 1:26 left in the period. Black lifted the Wolverines’ spirits with her third three in about three minutes and Friday Harbor led 48-44 with less than a minute to go.

Friday Harbor lost another key player when senior Bailee Lambright fouled out with 36 seconds on the clock. The Falcons converted both free throws and after the Wolverines failed on a one-and-one, they tied the game. Friday Harbor put up a potential game-winner with a few seconds to go but it didn’t drop.