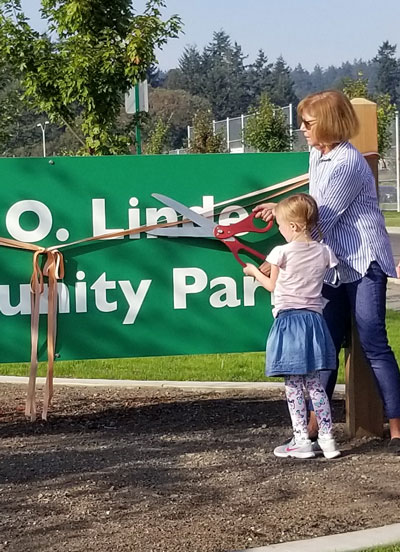 As friends and family gathered for the dedication ceremony, children slid down a slide, swung on swings, practiced soccer kicks, while adults played Lacrosse, soccer and walked on the trail at the John O Linde Community Park in Friday Harbor.

Linde was a  District Court Judge for 21 years and then the first San Juan Island Superior Court Judge. His love of children and his efforts to bring about  new sports fields was well-known.

Linde was a Little League coach and umpire-in-chief for many years. He was a member of Purple and Gold, and an active board member of Friday Harbor Athletic Association. He was also part of the committee that brought lights to the high school football field.

Linde was passionate about youth involvement in sports and he was a key player in the early development of the community fields project. One of the attendees said, "He once said if he had it to do all over again, he'd have been a coach".

Mayor Pro Tem of Friday Harbor Farhad Ghatan said, "This is a culmination of many years. We owed this park to the children. We are fortunate to have so many generous people follow in the footsteps of John."

The Linde family gathered in front of the sign and John's widow, Carole Linde, had help from her granddaughter in cutting the ribbon.

The 30-acre park, which is still in development by Friday Harbor Athletic Association and the operations and maintenance of completed areas of the facility is managed by Island Rec.