Some of the players on Friday Harbor High School’s volleyball team  weren't even born the last time a Wolverine team competed in a state tournament. The Wolverine spikers’ state drought has been so severe they rarely even imagined a whiff of top-level competition.

“We haven’t even sniffed it,” said Travis Mager, a Wolverine coach for 11 years. 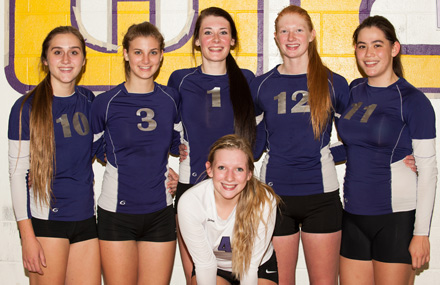 This year’s Friday Harbor volleyball team is not only sniffing a state berth, they’re drinking from the Final-16 Cup: This weekend the Wolverine spikers are competing in a state tourney for the first time since 1997. And five seniors -- Madi Kincaid, Taylor Turnbull, Lili Wood, Uma Hu and Allie Galt -- plan to savor their trip to the 2015 Class 2B State Tournament in the Yakima SunDome this weekend.

“We deserve it,” Kincaid said. “We played so hard to get where we are today.”

“Those five grew up together,” Mager said. “They took their lumps as a young group ... This is their reward for the past four years.”

Stiff competition from Lynden Christian, King’s and other powerhouses blocked the Wolverines’ state path when they competed in Class 1A. The competition continued just as strong when Friday Harbor dropped to Class 2B a few years ago and ran into La Conner, who year after year dominates the Northwest 2B/1B League.

“La Conner places in the top three in state every year,” Mager said of the Braves. “La Conner has a top level program. They produce every year.”

The Braves reloaded this year but the Wolverines reached their level. Senior exchange student Ilaria Verri joined Friday Harbor’s four-year quintet, rounding out one of the most experienced and talented line-ups the Wolverines have put on the court in years. Friday Harbor went 12-2 in regular season matches and finished second in the Northwest 2B/1B League with their only loss to undefeated La Conner. The Wolverines opened the playoffs with a 3-0 sweep of Concrete in the Class 2B District Tournament Oct. 29 before falling in three to La Conner.

Post-season competition remained rigorous when Friday Harbor opened the Class 2B Bi-District in Southwest Washington Oct. 31 with a 3-0 sweep Willapa Valley at Toutle Lake. The Wolverines fell 0-3 to eventual runner-up Toutle Lake but remained alive in the state-qualifying tourney.

Friday Harbor returned to Southwest Washington Nov. 4 needing a victory to prevent elimination. The Wolverines rallied for a 3-2 win over Raymond in Willapa Valley High School. “Willapa Valley is three miles from Raymond,” Mager said. “The gym was full of Raymond’s fans.” The Wolverines won the first game 25-16, but dropped the next two 31-33, 25-27. They rallied and knotted the match 2-2 with a 26-24 fourth-game win and silenced the crowd with a 15-13 fifth game victory.

“It was brutal,” Mager said of the long contest.

In a match that didn’t finish until nearly 10:30 p.m., Wahkiakum defeated exhausted Friday Harbor 3-0, forcing the Wolverines into a winner-to-state/loser-out match.

Friday Harbor trekked back to Southwest Washington -- South Bend High School -- on Nov. 7 for the seventh-eighth place battle. Morton-White Pass topped the Wolverines in the first game 25-21 but the Wolverines took the next three 25-19, 25-20, 25-20 and clinched the district’s final state berth.

“We lost the first game and from then on we thought, ‘Let’s not lose,’” Galt said. “We won the second game and decided, ‘We’re not going to lose.’

“The drive was really long and we didn’t drive all the way down there to lose.”

“We were so excited when we scored that last point,” Kincaid said.

Traveling to Yakima and competing in one venue will almost be a break for Friday Harbor. In district and bi-district action the Wolverines competed in seven matches. They logged 2,000 miles in their school’s Suburbans, made eight ferry sailings and spent five nights in hotels.

“We put in half a season in 10 days,” Mager said. “We learned how to travel and play. This is second-hand to us now.”

Friday Harbor opens the state tourney at 8 a.m. Friday, Nov. 13. against Tri-Cities Prep. If the Wolverines win, they face the winner of a match between Brewster and familiar rival La Conner at 5 p.m. The losers of the Friday Harbor/Tri-Cities Prep and Brewster/La Conner matches meet at 3:15 p.m. in a loser-out contest. (State Tournament Bracket) http://www.wiaa.com/Brackets/T1204.pdf

Mager is confident his players can compete with Class 2B’s best. “We’re all on a level playing field now,” Mager said. “Everybody has a fair chance.”