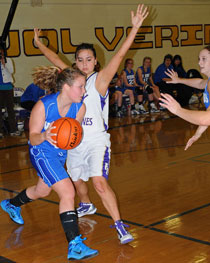 “It was great,” said Friday Harbor coach Eric Jangard of the Wolverines’ second league title in three years. “It’s good for the program.”

The Wolverines finish the season 12-2 in conference and 14-6 overall. The visiting Vikings placed fifth in the league and were 7-7 and 9-9.

The island teams were knotted 9-9 after the first quarter but the Wolverines outscored the Vikings 10-9 in the second period. Friday Harbor sank 8 of 10 free throws while the Vikings 6 of 14.