Five members of the Friday Harbor High School Sailing Team spent last weekend (April 28-29) waiting for wind at Seattle’s Sail Sand Point facility at the District Championships. Huddled beneath a team tent, with school books opened, the rain drummed yet the wind refused to fill-in until late Saturday afternoon. When racing actually happened, Friday Harbor’s skipper Per Black, and Zoe Calverley, Emmett Carrier and Leah Black (who all took turns crewing in Per’s boat) were the winning boat in “A” Division, recording 1st, 2nd, 7th, and 1st place finishes for a total of 11 points. 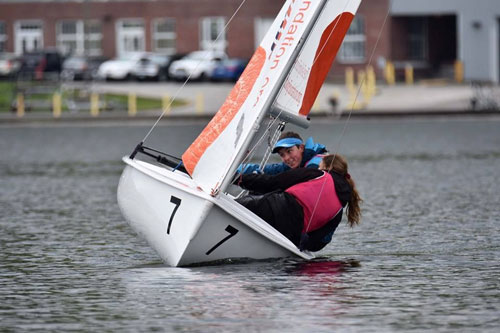 Per and Zoe. Photo courtesy of Friday Harbor Sailing Club

Leah Black, Addi Kessler, and Emmet Carrier took turns skippering the team’s “B” Division boat. After one race, which Per and Zoe won by an astounding distance, Burke Thomas, the Orcas Coach emeritus, was heard on the dock wondering “where is Per hiding his motor?!?” 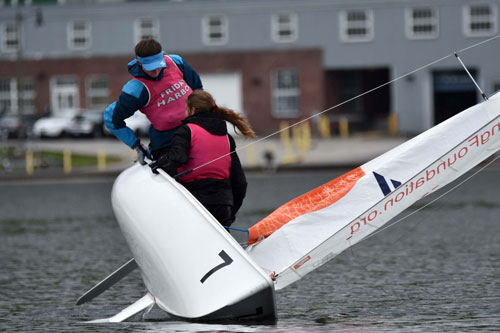 Per and Zoe preparing to roll. Photo courtesy of Friday Harbor Sailing Club

While some racing occurred on Sunday, the winds were even lighter than Saturday, resulting in unsatisfactory conditions and many started but unfinished races.

Friday Harbor combined A and B Division scores placed the team in 11th place out of the 20 competing schools.

By finishing as the low (winning) boat in “A” Division at Districts, Per Black completed what can only be called a “perfect” season, as the Spring Street International School senior won his division in every regatta that the team competed in this season. Per will sail for Bowdoin College next year.

In high school sailing, both A and B divisions must complete the same number of races. In a dramatic twist at the end of the day, the race committee decided that with the light winds it could not complete two required “B” division races in the allotted time, necessitating that it discard two results from the “A” Division races.

With this decision Orcas High School moved up in the standings, leap frogging two teams to finish in second place and earn a trip to nationals. Orcas’ team did an outstanding job all weekend, staying close to the top in nearly every race. Orcas’ “A” Division was skippered by Maggie Toombs and crewed by Emma Freedman. This duo recorded scores of 7, 8, 3 and 16.

Dominick Wareham, skipper, and Mille Kau, crew were the low (best) boat in “B” Division finishing with three second places and one fourth. The Nationals take place later this month in Corpus Christi, Texas.