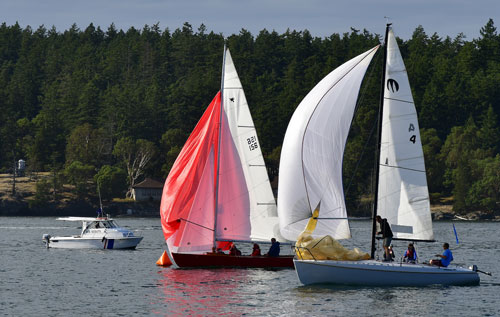 The currents were strong, the winds light and temperamental, for the 48 sailboats in the 49th annual running of the Shaw Island Classic. Hosted by the San Juan Island Yacht Club, the race is a highlight of the summer boating season, drawing sailors from throughout the region to circumnavigate Shaw Island. Racers can circle the island in either direction factoring in shifting winds, variable currents, narrow rocky channels and ferry traffic.

The wind decided to die right at the race start but then freshened enough for most racers to make the dash for Upright Channel. Ninety percent of racers chose to do a counter-clockwise route with favorable currents most of the way. However, half the cruising class could not get past Turn Island – a two-knot adverse current trumped four knots of wind. For the majority of racers that made the turn, light wind made for a stately pace up Upright Channel, into Harney Channel and Wasp Passage on the northern side of Shaw. 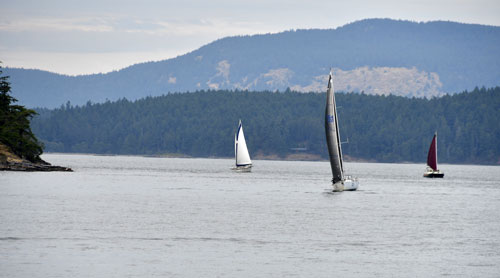 Just as many racers thought crossing the finish line before the deadline was out of reach, 10-12 knots greeted them as they entered San Juan Channel with a favorable ebb tide allowing a fast run across the line.

After the race, racers and guests enjoyed a hearty lasagna dinner prepared by the San Juan Island Yacht Club’s First Mates followed by the awards ceremony.

Best Overall on Corrected Time this year went to the monohull Hydra, a King 40 skippered by Sam Richardson.

Prizes were awarded in all divisions. Race results are detailed below. Other than fastest elapsed time, all awards are based on corrected time, adjusted for time-on-time based on PHRF or committee assigned ratings. Detailed results and photos can be found at the Club’s website at http://www.sjiyc.com.

More in this category: « Betsy Wareham finishes 5th in Martin 242 North Americans in West Sound Tired of virtually living? After-school sailing club gets students out in the sun and wind »