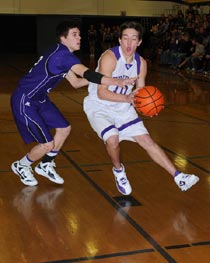 “That was nice,” Friday Harbor coach Rod Turnbull said of his first home playoff win as a Wolverine coach.

“It gave us that extra burst of energy,” Turnbull said. “You see that big crowd over there and you don’t want to disappoint them.”

The Wolverines didn’t. They raced to a 21-10 first-quarter lead and were up 33-25 at halftime. After the Pioneers cut the lead to three points late in the third quarter, the Wolverines responded with a 20-10 finish.

“It was really nice to see us answer their run,” Turnbull said.

Otis Cooper-West led all scorers with 18 points, including three of the Wolverines’ five first-half three-pointers. The sophomore also dominated the boards, grabbing 12 rebounds.

The Wolverines enter Tri-District play as District 1’s No. 3 team. They will play at No. 3 team from District 3. Check out the Tri-District Tournament bracket for more information.