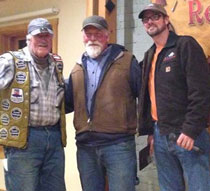 Taking home prizes in this is two-day event put on by Puget Sound Angler’s Fidalgo-San Juan Islands Chapter, were:

All proceeds from this event go to Salmon enhancement projects in the San Juan Islands.

This a selective fishery tournament, with only fin clipped hatchery origin fish being legal to keep and weigh in.

The first derby to take place in Marine Area 7 after the December 1 Winter Chinook Season opening, it is also the last stop of the year on the Northwest Salmon derby Series.

This year was sold out, as the maximum of 100 teams signed up. The Resurrection Derby, since it’s inception, has been widely acknowledged as the “best of the best” hardcore Salmon tournament in the region, attracting saltwater anglers from all over the Northwest and Canada. For more info, go to resurrectionderby.com, or their Facebook page.

A big thank you to Derby Chairman Chris Long and all the volunteers that make this great event possible. It sounds like over $6000, and possibly much more will be going to buy needed equipment for local hatcheries. This will help to put more Chinook Salmon in the water for all fisher folks, and Orcas alike.

That’s what I call a win-win for a good cause. And the businesses in Friday Harbor who provided lodging, food, groceries, beverages, fuel, tackle, and such great hospitality would agree, I’m sure.

My personal thoughts on the derby as one of the founders and past Chairman: The organizers and workers who donate their time and pitched in to provide such a good experience can’t be thanked enough. The process for participants is simple and easy. From start to finish this is a derby put on by anglers, for anglers.

When seeing friends from all over on the docks, or at the watering hole later, there is an easy camaraderie, even though many of us are very competitive. This event is a blast! Also, thanks to the Northwest Salmon Derby Series for all their help and great promotion.

When one looks at the amount of fish caught during this years contest, it may seem large, but in the big picture this is a relatively small take of hatchery only Chinook from the ecosystem. The numbers of hatchery produced Blackmouth now swimming around out here is testament that hatcheries can work for Chinook production.

These are nice fish for this time of year, and they are growing bigger every day. I was talking to some of our Canadian friends about the 34lb King Salmon caught in early May at the derby in Sidney B.C.. From the samples of the fish, biologists can tell that it came from one of our local Puget Sound hatcheries. This wasn’t a mature fish either. The WDFW hatchery at Marblemount on the Skagit got a clipped fish back a few years ago that weighed 65lbs. You can’t tell me that any self respecting Orca would turn up his nose at that King.

With all the huge Federal grant money being available for habitat restoration, maybe we should look at improving hatcheries, and increasing Chinook production as an equal bonus for Whales and people. Habitat improvement is huge for going forward, and to me this means the removal of some obsolete dams. But we are also seeing road blocks to Salmon recovery, such as the ever growing predation on returning Chinook by Sea lions on the Columbia River, that need to be addressed, and soon. The increase in Pinnipeds in Puget Sound in recent years is astonishing.

I love Popeye, our local Seal in Friday Harbor as much as anyone, but the damage her furry friends are doing to Salmon and Steelhead smolts and adults is far more than any time in history, because there are more Seals than anytime in modern history.

Overpopulation of any kind, whether it’s Cormorants and Turns who eat Salmon fry by the millions, Seals and Sea lions, or, especially people, is not a good thing. We have moved in to a new age, and we all who have a stake in the this environment need to work together to make sure there are Salmon in the future. Until we can figure out how to solve these other problems, increased hatchery production may be one way to go.

I would suggest doing your own research, and joining one of the regional organizations such as Puget Sound Anglers, to see what you can do get involved and make your voice heard. 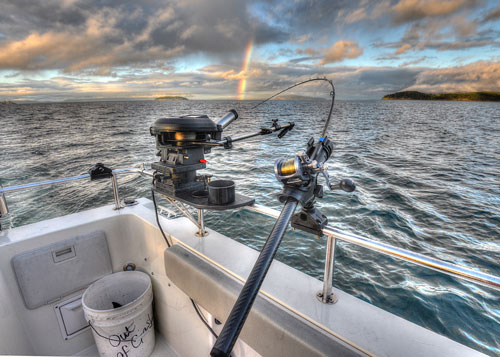 Hugh Allen took this great shot of downrigger trolling during the tournament. The weather and the fishing cooperated to make a spectacular two days of fishing in the San Juan’s. There is no more beautiful place on earth to get together with friends on a boat and fish. 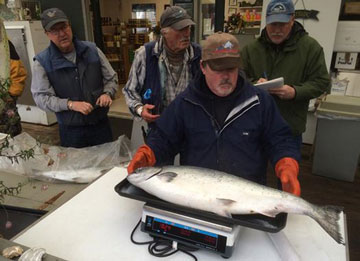 Many thanks go out to Friday Harbor Sea foods for doing the official weigh in at the derby for the 5th year in a row. Pete Nelsen weighed in this 18 lb plus Chinook to take the lead on Friday. The derby organizers did a great job of posting updates on Facebook, so we knew “Uncle Pete” had the top spot as soon as he hit the scales. I’m sure Pete doesn’t troll “The Facebook” or “Bookface” or whatever we youngsters call it, but he is pretty darn good at trolling for San Juan’s Salmon. He would eventually get knocked down a spot in this event, but winning over 30 derbies in his long career makes him the old G.O.A.T.(Greatest Of All Time) in my book. And all of us who are tournament Salmon fishermen are in some way his progeny. 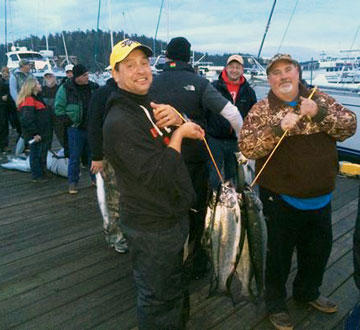 More than 400 fish weighed in made this the best fishing of any Blackmouth tournament I’ve heard of. It’s great to see that hatcheries in the region have had so much success with producing resident Chinook for folks to fish on. It’s on in the ‘Juan’s! 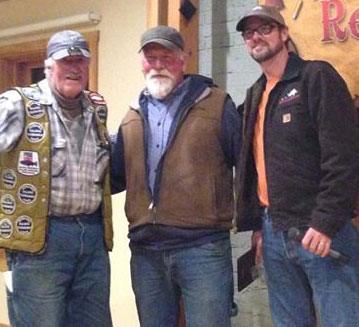 Steve Martin of Bellingham won the $10,000 top prize. Here he is flanked by Pete Nelsen and Derby Chairman Capt. Chris Long of Jolly Mon Charters of Anacortes. I don’t know if Steve is a “Wild and Crazy Guy”, but he is a long time San Juan’s fisherman that deserved a win. 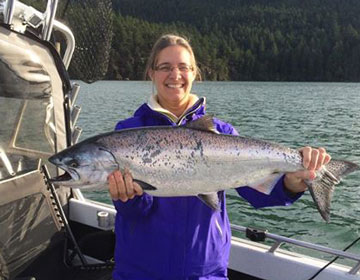 The fishing was so good, that event Chairman Chris Long and his wife Vicki just had to stop on the way home and drop a line.

Story and photos by Kevin Klein