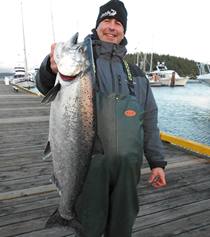 Bluewater Bar and Grille in Friday Harbor put on a Blackmouth derby Saturday, January 21, 2011. Prize was $1000, winner take all for biggest fish. With the forecast calling for gales, only ten hardcore boats braved the winds to fish in the one day event. Luckily, the wind blew from due West, and San Juan Channel was fairly calm and protected.

The fishing was good, with most boats hauling in at least some keepers. Chad Hoffman, fishing with Bobby Wilson and Chuck Payne of San Juan Sportsman Charters reeled in the biggest Salmon. This 11.4 lber was Chad's first blackmouth ever. After the weigh in all the anglers met at the Bluewater for awesome appetizers and prime rib.

This was a fun, informal derby that I think will happen a couple more times this season. Look for possible dates of March 3rd and April 28th to be the next competition and prime rib feeds. Also on the horizon is the Roche Harbor Salmon classic Feb. 3rd and 4th, and the Frank Wilson memorial Blackmouth Derby starting Feb. 1st to April 15th.

Chad Hoffman looks extra excited holding up his winning fish, and glad to see his first Blackmouth ever!

We layed out the contenders on the dock in a measuring contest to see who had the biggest.

These two 9lbers filled out my "Tuna Warren Signature Series" Katch Kooler from Silver Horde. Notice the snow used to keep them cool before weigh in. One good thing about the white stuff is it makes like free shaved ice.

Also from Siver Horde, the "Resurrection" Tailwagger spoon, and from Q-Cove, the "Blackout" Flasher have been a productive combo. I really believe you get a better hook set, and more of a direct line to the fish with the Breakaway flashers. Run 48" of 25lb. P-Line Floro between the spoon and flasher for best action.

Story and photos by Kevin Klein