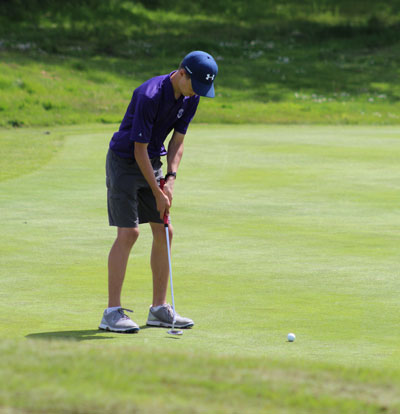 Dylan, Ethan and Peter will advance to the next level of competition at the Bi-District Tournament to be played on the same course next Thursday, May 17.

Tobin Arden from Lopez was medalist for the event with a fine 76. Tobin has won the tournament for the last two years. This is the second year in a row Dylan has finished in third place. For Dylan, this was just a practice round. The real competition is next week when a trip to the State Tournament is on the line. I expect him to play even better next week now that he has seen the course after not playing it for over a year.

Freshman Ethan Havel continues to improve. To finish in eight place as a freshman is quite an accomplishment. If he can hold it together next week, I expect him to make the trip to the State Tournament. The third member of the team to make it to biDistrict was Junior, Peter Kulseth with a 116. Peter can play much better and I wouldn’t be surprised to see an improvement of more than 16 shots next week.

First Alternate went to Sophomore, Weston Swirtz. If Weston is lucky enough to get into the field, he could surprise everyone with a much improved score.

The fifth and sixth players on the team had a tough day on the course. Ian Volk cut his hand on a flag stick on one of the opening holes. He had a little trouble hanging onto the club while the blood covered his grip. Senior, Sean Chevalier got every bad bounce you could imagine. As a first year player, making it to the District Tournament shows how much he improved in just two months. All six of the Friday Harbor players made me proud to be their Coach.

The Bi-District tournament will be held Thursday, May 17 at Oak Harbor. All three players that made the cut have their individual list of shots to work on. I’m going to go make reservations for a couple rooms at the State Tournament right now.