Jocelyn Roberts and Tenley Neslen are looking forward to competing at state this weekend. The Friday Harbor High School sophomores won’t boot soccer balls or spike volleyballs for the Wolverines: They will slice through the water with the Anacortes High School Seahawks swim team at the Class 2A State Swim Meet in the Weyerhaueser King County Aquatic Center in Federal Way Nov. 13-14, 2015. 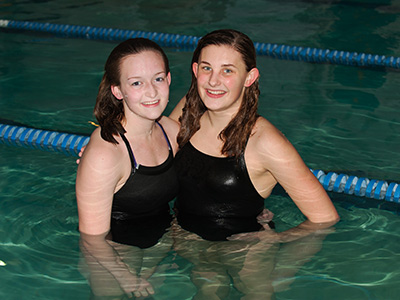 Friday Harbor High School's Jocelyn Roberts, left, and Tenley Nelsen will be competing for Anacortes High School at the Class 2A State Swim Meet this weekend.  Photo by Matt Pranger

“The state meet is always really fun,” Nelsen said. “You get to knew the team a lot better.”

The girls log many miles in and on the water to swim competitively at the high school level. Veteran swim coach Tim Collins coordinates with Anacortes coach Leslie Mix and then guides Nelsen and Roberts in workouts in San Juan Fitness Club’s pool most weekday afternoons. On Saturdays the girls hop a ferry compete with their Seahawk teammates on Saturdays.

“The island should be very proud of them,” Collins said.

Both Friday Harbor swimmers are making return appearances in the state. Last year Roberts commuted nearly daily to practice and compete with the Anacortes squad and her dedication was rewarded with a state berth. Nelsen swam for Cheney High School last season. Her father -- Cart -- became the Friday Harbor Middle-High School music director over the summer and the family moved to San Juan Island.

Roberts and Nelsen qualified for this year’s state championships during their first meet of the season and have been improving their times throughout the fall. Roberts will compete in the 100-meter butterfly race and the 200 medley relay. Nelsen will swim the 200 and 500 freestyle contests and the 200 medley and 400 freestyle relays. 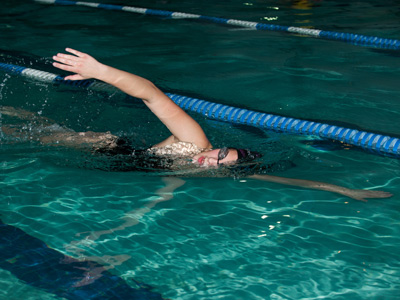 Nelsen is concentrating on cutting a second from her longest race. “I want to break 5:30 on my 500. It’s been harder than I thought it would be but I’m giving it my best shot,” she said. 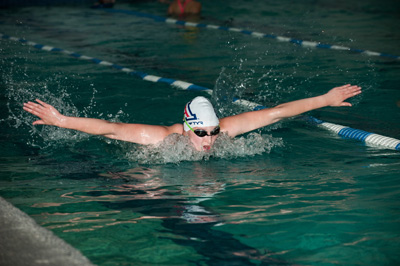 Roberts is seeking to cut a half-second in her shortest event. “I hope to break the minute mark in the 100 fly,” she said.

Collins commended his charges for their “mental fortitude” under less-than-ideal circumstances. While the pool at San Juan Fitness is a valuable resource -- the girls would be round-tripping nearly daily to Anacortes without it -- the facility lacks for serious swim training: It’s lanes are shorter than most mainland pools and diving starts are not possible. And although Nelsen and Roberts encourage each other to practice hard, it’s not the same as pushing yourself against several teammates.

“In any other situation they would likely contend for a state championship,” Collins said. “It’s something to be said for how talented they are.”

The swimmers complimented their island coach for his efforts. “He keeps us motivated,” Roberts said.

“They are a joy to work with,” Collins said.

“Our parents have been really supportive of all the crazy things we ask them to do,” Roberts said.