Wahkiakum’s Peyton Souvenir, one the best point guards in the state, pumped in 29 points and the Mules ended Friday Harbor’s season with a 67-52 victory in at the Class 2B State Regional Saturday, Feb. 27, 2016 in Mount Vernon High School. 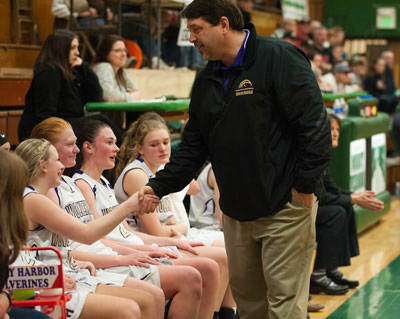 “Our players had a great season,” Woods added. “They have nothing to hang their heads about.”

Woods is proud of the Wolverines’ accomplishments this season. They shared the Northwest 2B/1B League title and were the Class 2B District 1 champions.

For the first-year Friday Harbor coach the success this season went beyond the victories and titles.

“I hate to see it come to an end,” Woods said. “These girls are so much fun. It was so much fun all season long.”

In the regional game, Wahkiakum led 15-12 at the end of the first quarter but outscored Friday Harbor 21-15 in the second period for a 36-26 halftime lead.

“Wahkiakum shot extremely well,” Woods said of the Mules who canned 10 three-pointers. “Our defense wasn’t that bad. With their point guard and three other people making three’s they’re hard to stop.”

Souvenir scored 23 of her game-leading 28 points in the first half and finished with five three-pointers.

“That is one great basketball player,” Woods said.

In the third quarter Friday Harbor cut into Wahkiakum’s lead a few times but Souvenir or a teammate would respond, often with a three-pointer.

“Our players didn’t quit,” Woods added. “They kept trying to execute but every run we made they answered.”

Woods expects the contributions of seniors Lili Wood, Galt, Turnbull and Kincaid will extend beyond this season.

“Their importance to this team is without question,” Woods said. “They bought into a new system and worked so hard. They really set the tone for what Friday Harbor girls basketball can be like...They will be missed.”