Friday Harbor clinched a trip to the Class 2B State Baseball Tournament by ousting Orcas Island 12-1 in the District 1 consolation final at Saturday, May 14, 2016 at Stanwood High School. 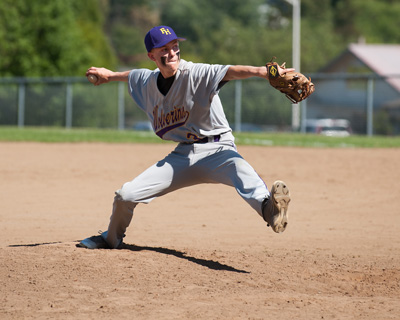 Friday Harbor's James Guard hurls a pitch during a Wolverine home game earlier this season. The junior helped keep the Wolverines playing in the postseason by tossing a one-hit victory against Concrete May 14, 2016. Matt Pranger photo

“It was the best we’ve played in a while,” Friday Harbor coach Rich Warin. “It’s nice to see that going into the state playoffs.”

The Wolverines (16-3) open state regional play against Tri-Cities Prep (20-3) at 10 a.m. Saturday, May 21 at Adna High School. The winner of the loser-out contest advances to the regional final and will face the winner of a game between Napavine and Toutle Lake.

Friday Harbor advanced to the winner-to-state contest against Orcas (11-7) with a 3-0 trimming of Concrete (7-14) in a consolation semifinal earlier in the day. La Conner (13-6) won the district title and a state berth with a 10-1 victory over Orcas. That set up the loser-out showdown in the double-elimination tourney between the island rivals.

With the season-extending victory over Orcas, Friday Harbor avenged a 4-3 loss to the Vikings in the district tourney’s first round five days earlier. The Wolverines scored eight runs in the first two innings of the 10-run-rule victory. Junior Eli Cooper-West ripped a triple and drove in two runs. Sophomore Jackson Pieples rapped two hits and had 2 RBI. Junior Kai Herko had two hits and earned the win.

Junior James Guard struck out eight and allowed only one hit against Concrete (7-14). Cooper-West tripled and scored a run, Pieples singled in a run and Herko scored a run.