Friday Harbor edged Orcas Island 7-6 in the first round of the Class 2B District 1 Fastpitch Tournament Wednesday, May 18, 2015. With the victory the Wolverines are a win away from a state tourney berth. 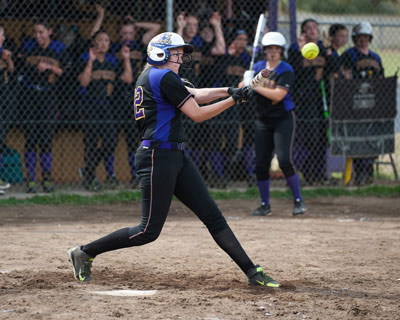 The Vikings started strong against the host Wolverines: Jessie Nichols hammered a three-run homer in the third inning for a 3-0 lead. The sophomore plated Katy Minnis, who singled, and junior Bethany Hansen, who reached base on balls.

The Wolverines scored a run in the bottom of the third on sophomore Mili Holt’s single and freshman Ava Hoffman’s sacrifice fly.

Minnis ripped a solo homer to pull the Vikings within a run in the fifth but the Wolverines scored two in the bottom of the frame. Sophomore Savannah Hoffman and Hopkins rapped base hits. Wilson singled in a run and junior Emma Wickman reached on an error and recorded an RBI.

Orcas took advantage of a walk and errors to score two runs in the seventh but the Wolverines recovered for the victory.

Wickman struck out five in earning the victory.