Friday Harbor High School boys basketball team’s offense surged in the fourth quarter for a 55-41 victory over Crosspoint Point High School Thursday, Feb. 15. The Wolverines outscored the Warriors 23-7 in the final period and secured the Class 2B 2018 Bi-District Basketball Tournament title with the win at Sedro-Woolley High School. 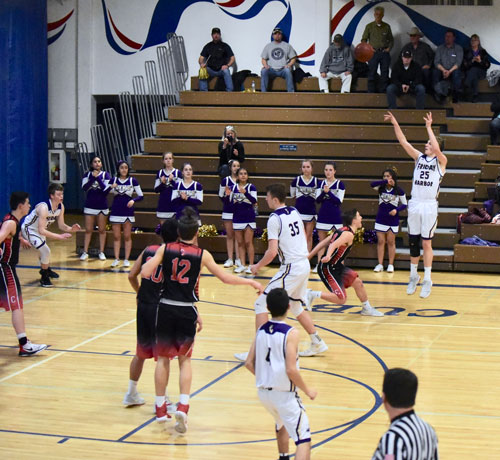 Isaac Mayer hits a three point shot in the Wolverine run to the win over the Warriors. John Stimpson photo

Orcas Island ousted La Conner 60-52 in the Bi-District consolation final. The Wolverines (14-8), Vikings (10-8) and Warriors (13-7) advance to the regional round of the state tournament Feb. 23-24. Opponents, sites, dates and times will be announced Sunday, Feb. 18 on the Washington Interscholastic Activities Association’s website. (http://wiaa.com/ardisplay.aspx?ID=1717)

Friday Harbor’s Marshall Clark scored 11 of his game-leading 19 points in the fourth quarter against the Warriors. The junior post sank 7 of 8 free-throw attempts in the final period and was 9-for-13 from the line for the game. Senior Isaac Mayer pumped in 16 for the Wolverines. Junior Kyle Mapstead scored 8, junior Chase Wilson 5, senior Rio Black 4 and junior Lucas Chevalier 3. The Wolverines made 16 of 21 free-throw shots.

The Wolverines go on to the 2018 WIAA 2B Boys Regional Playoffs & State Basketball Tournament in Spokane. Regional playoffs are February 23 and 24. State Tournament is February 28 to March 3. 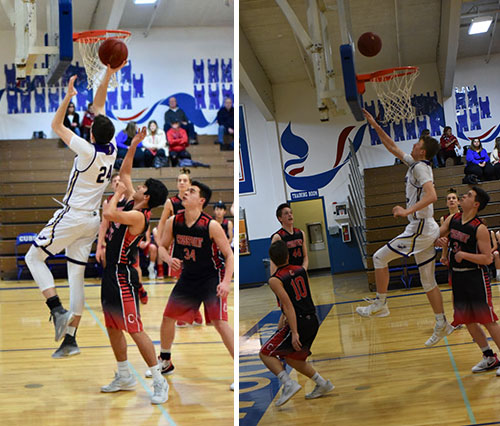 Left: Kyle Mapstead adds points with a lay up.

LINK to SCORES and PHOTOs from this season