The Friday Harbor baseball squad closed the regular season with an 11-1 victory over visiting La Conner Friday, May 4 and picked up another victory the next day after the short-staffed Braves forfeited. 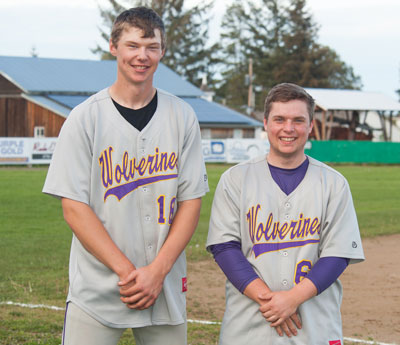 Friday Harbor seniors Rio Black, left, and Jackson Pieples play their final game at the Wolverines' Hartman Field Tuesday, May 8. The Wolverines host the Concrete Lions in the first round of the Class 2B Bi-District Tournament. Matt Pranger photo

Friday Harbor (13-4 overall) won the Northwest 2B/1B League with an 11-1 record and advances as the conference’s top seed to the Class 2B Bi-District Tournament. The Wolverines will host Concrete (8-9) Tuesday, May 8 in the first round of the double-elimination tourney. Concrete placed third in Northwest 2B/1B with a 6-6 record. The winner of that game moves on to the Bi-District Championship Saturday, May 12 in Sedro-Woolley. The Bi-District’s top two teams advance to the state tournament.