Seven Friday Harbor boys will be competing in the Class 2B Bi-District Track and Field Championships after strong performances at the District 1 Meet Friday, May 11 at Mount Vernon High School. The top three district finishers earn berths to state-qualifying Bi-District at King’s High School Saturday, May 19, 2018. 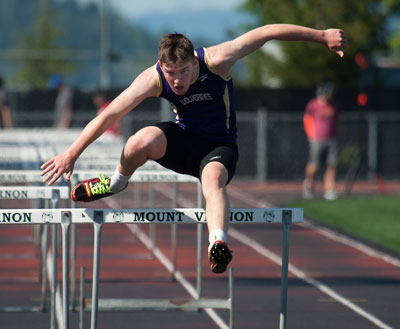 Sophomore Ryan Schaefer finished first in shot put with a PR heave of 40 feet and a half-inch and also won the discus with a toss of 114 feet.

Junior Henry Duke qualified for Bi-District with a runner-up fling of 101-06 in the discus. He finished fourth in the shot with a 36-9.5 attempt — two and a half inches short of the third-place finisher’s effort. He was seventh in the javelin with an 111-05 mark.

Sophomore Thomas Dietz placed sixth in the javelin with a 115-08 throw.