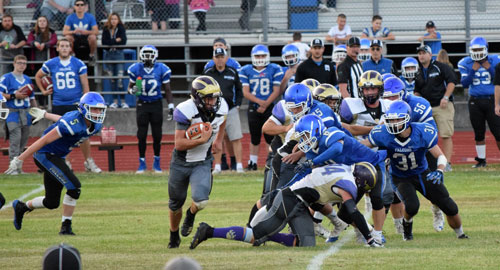 FHHS Senior Tailback, Emeron Geiser (with ball in hand) breaks off a big gain against the South Whidbey Falcons on August 31, 2018 Photo by  Becky Volk

And they have gone...off. In the first game of the season, playing up one level and on the road his offensive line bashed open holes for Wolverines' ground-and-pound rushing attack. In that game senior tailback, Emeron Geiser and company, went for nearly 400 yards rushing in the season-opener against the South Whidbey Falcons.

Hauck mixes in an efficient passing attack to keep defenses from keying on the Wolverines' rushing game. It paid off in the 20-19 loss to South Whidbey as the team eclipsed 400 yards of total offense. Quarterback, Jaden Jones 5 of 8 for 35 yards and a touchdown against the Falcons.

Opening the holes for WIAA's Week 1 State 2B Player of the Week, Emeron Geiser are:

Against the Vikings,  Coach Hauck feels that the Wolverines physically wore their opponent down with his offensive line that averages 253 pounds.

While Emeron Geiser is a team leader his younger Milo is his lead blocker. The elder Geiser erupted for 356 yards on 44 carries against South Whidbey and backed that up that performance with a 235 yard rushing encore against the Bellevue Christian Vikings, also a 1A school.

While Coach Hauck says that the power run game starts with his offensive line he says that the same applies to the defensive front for Friday Harbor, as they have been equally dominant. Through two games the Purple People Eaters defense has held their opponents to 113 total yards rushing including a negative 21 yards for Bellevue Christian a week ago.

The big fellas up front have controlled the line of scrimmage and have adopted Coach Hauck's no-nonsense approach. "Our defense carried us last year," he says but now the Wolverines' power run game has take some of the pressure off of the defense to be perfect... but that won't stop the defense from trying to be perfect.

"We always strive for perfection," Hauck says. They nearly achieved it in holding Bellevue Christian to 24 yards total offense in the shutout victory in their home-opener last Friday night.

Tonight the Wolverines defense will face a tall task as they square off against their third 1A opponent in the unbeaten Coupeville High School Wolves. FHHS's stout defense will face their toughest challenge with CHS's Sean Toomey-Stout who also has a 300-yard rushing performance to his credit.

Led by his own massive offensive line that averages 265 pounds, Toomey-Stout had 321 yards and two touchdowns on 22 carries in their week one victory over Port Townsend.

Coach Hauck says that he and his coaching staff have asked a lot out of the players and that they've embraced every challenge.

The Coupeville Wolves have their running game working but their aerial attack remains a work in progress. CHS relies upon Toomey-Stout similar to how Geiser is the feature back for FHHS. Both have carried their team rushing and both are stellar athletes. For the Friday Harbor Wolverines to pull out a win tonight they need to ground-and-pound and pound Coupeville’s rushing plays to the ground. Tonight’s game can be heard live on fhTinyRadio.com starting at 5:30 PM.