“It certainly will be something if we play them again in a couple of weeks,” Friday Harbor coach Brett Paul said after the Wolverines trimmed the Vikings in an eight-shot shootout for the District Bi-District crown on November 5, 2022. 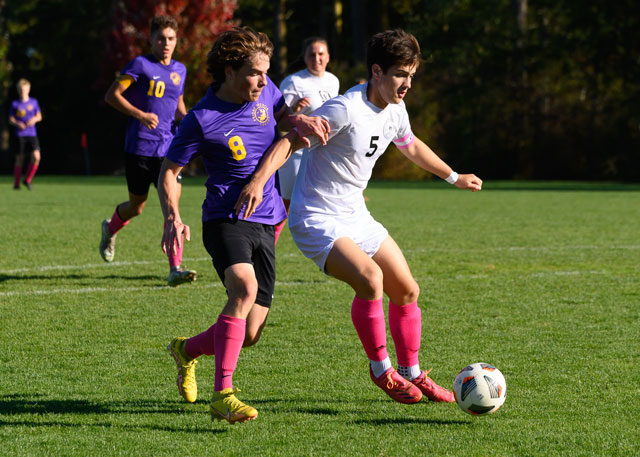 Long-time Orcas coach Terry Turner’s team went 1-2 one against the Wolverines this year but last season his squad advanced to the championship with a 2-0 semifinal victory over Friday Harbor.

Turner enjoys the challenge of competing against less-known opponents in the playoffs. 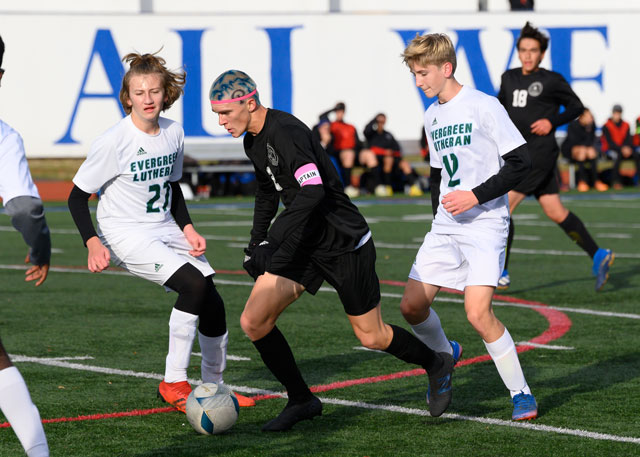 The Vikings and Wolverines must defeat their semifinal opponents for an instant island classic to occur. Orcas Island (15-2), the No. 2 seed, will meet familiar foe seventh-seeded Mount Vernon Christian (11-4-1) at 1 p.m. Friday, Nov. 18. at Renton Memorial Stadium. Friday Harbor (13-2) and perennial contender St. George’s (14-3) meet in a semifinal at 3 p.m. If the top-seeded Wolverines conquer the fourth-seeded Dragons, and the Vikings quell the Hurricanes, the island rivals will meet in championship match at 3 p.m. Saturday, Nov. 19. Losers of the semifinals will play for third- and fourth-place in the consolation final at 11 a.m. Saturday.

When Friday Harbor’s soccer squad takes to the pitch this weekend they will be shooting for a goal unattained by the school in more than three decades — a state championship in a team sport. Though the Wolverines came close to being crowned champs in a few different sports in the past 36 years, the 1986 Friday Harbor volleyball remains the school’s only state team title bearer, according to the Washington Interscholastic Activities Association.

“Our players are in great spirits this week,” Paul said. “They’re working hard in practice and excited about the upcoming game against St. George’s.”

St. George’s is making a 13th state soccer finals appearance. The Dragons thrice snared titles, most recently in 2019 when they ousted the Wolverines in the quarterfinals. The Spokane private school also finished second three times, placed third six times and was fourth once.

“They put together a strong program year to year,” Paul said.

In addition to placing fourth last year, the Wolverines finished fourth in 2003 and were third in 2015.

Soccer teams from the east and west sides of the state rarely face off in the regular season, making it difficult to analyze an opponent until state tournament play. “It’s always a challenge,” Paul said.

However, the Wolverines’ coach believes his team is prepared for their next match. “I’m confident we will come out and play the game we practiced,” Paul said. “If we play the way we know we can play, I’m pretty confident we can do well against St. George’s.”

The defending champs, who were the runner-up in 2018 and fourth in 2017, are not looking past their next foe. “Our team has taken it one game at time all season, which is great,” Turner said.

Mount Vernon Christian has qualified for the state tourney more often than any other Northwest 1B/2B League team. They won a state title in 2014, were third in 2003 and fourth in 2000.

The semifinal between Orcas and Mount Vernon Christian “is going to be a real battle,” Paul said.

The Vikings trimmed the Hurricanes 1-0 in home and away contests this season. Whichever team advances knows, if they face the Wolverines again, they can compete: Friday Harbor topped Orcas 1-0 on the Vikings’ pitch, Orcas went to Friday Harbor and won 3-2 and the Wolverines prevailed over the Vikings bi-district championship; and Friday Harbor beat Mount Vernon Christian 3-0 at home but had to rally from a 2-0 deficit for a 3-2 road victory.

“The three of us are really, really close in skill level and St. George is also strong,” Paul said. “Friday will be really something.” 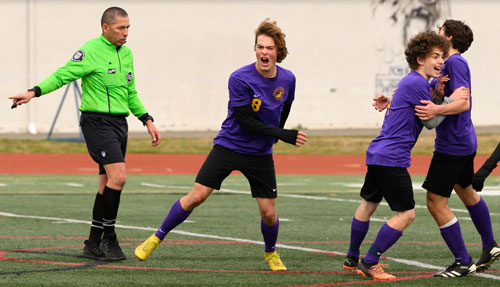 Friday Harbor's Owen Conde Raggett, center, howls a victory cheer as the official signals a goal by Adam Strasbourger, right. He headed home what would be the winning goal in the Wolverines' 1-0 victory over Puget Sound Adventist at Sedro-Woolley Friday, Nov. 11. SLIDESHOW of GAME

Teams sporting stingy defenses tend to fare better in the finals than those with overly-aggressive offenses. In their quarterfinal 1-0 win over Puget Sound Adventist the Wolverines showed they can hold their own in a defensive battle.

Senior goalie Luke Totten recorded the blank sheet. “Luke had a lot of good saves throughout the game, Paul said.

“Erik Corbin had an excellent game,” the senior’s coach said of the defender.

“I was proud of the defense for putting forth their best game,” Paul added. “Defensively, the whole team played really well.”

The Sharks lost 7-0 to Orcas last month. Their defense, which included two players who didn’t compete against the Vikings, frustrated the Wolverines. “They were a lot stronger than we anticipated,” Paul said.

Friday Harbor’s goal came with 90 seconds to go in the first half. “Fed from junior Alden Carli on a free kick, senior Jonah Parsons made a diving attempt to head it,” Paul said. “The ball bounced around and Adam (Strasbourger) cleaned it up and got a head on it.”

It was the fourth or fifth goal noggin-knocked into the net by the senior this season. “Adam has a knack for getting a head on it,” his coach said.

With a dozen seniors on their roster, the Wolverines will be fielding the most-experienced team in the finals. “We’ll use those seniors to the best of our ability,” Paul said.

Turner is a master of getting the most out of all his players and that was showcased in their 6-1 quarterfinal victory over Evergreen Lutheran. Senior Tommy Anderson-Cleveland recorded a hat trick. Senior Nicholas Rivera, junior Jefferson Freeman and freshman Anthony Conejo each chipped in a goal.

The Vikings’ coach credits senior captains – forward Anderson-Cleveland, mid-fielder Diego Lago and goalkeeper Paxton White – with coordinating their precise play. “They are the best in our league and they’re ready to go,” Turner said.

Though the trio stands out in ability, Turner emphasizes the Vikings “rely on team play, not individuals.”

Turner expects the Vikings to perform well if they believe in their abilities. “The key for us is to have confidence and play our game from the start."